There’s taking a bite out of the Big Apple and then there’s eating it to the core, taking the biggest breath imaginable, and spitting the seeds out onto the taxi-filled streets. The latter is exactly what Matt Long did. 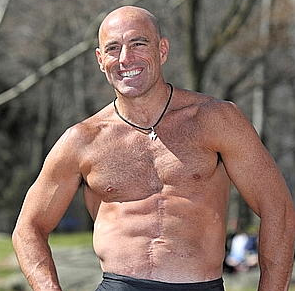 A former NYC firefighter, Long has experienced New York City to its core. Sitting in the back of a Ladder 43 firetruck headed for the World Trade Center on 9/11, Long saw dark plumes of smoke coming out of the towers. As his unit arrived on scene, Long saw bodies falling from the fiery buildings. Just minutes later, Long was running away from a collapsing tower that produced so much dirt and ash he couldn’t see for the next 10 minutes. He was one of the lucky ones. He was also one of the brave from the city’s fire department to enter hell and continue rescue efforts that day.

Terrorist attacks and natural disasters are unfortunately the bread to Long’s full story. The meat of   Long’s “devastation sandwich” is the 40,000 lb. charter bus that struck him in 2005, during the city’s transit strike.

Because Long, then 39-years-old, couldn’t drive or take the train on December 22, 2005, he decided to brave the cold and bike the three miles to work. Three blocks into his ride, a turning bus didn’t just hit Long. It trapped him between its undercarriage and the street. The seatpost from his bike was bulging out of his stomach and he was bleeding to death.

Not only was Long a firefighter, but he was also an outgoing bar owner that thoroughly enjoyed seeing people have a good time in his company. He was used to blazing a trail through the streets in one of the largest and busiest cities in the world.

On that December morning, however, Long left a blood trail all the way from the scene of the accident to the emergency entrance of New York-Presbyterian, one of the country’s top trauma hospitals.

Name all of the orthopedic injuries Long sustained and it’s enough to make one cringe – a broken left femur and tibia, a broken left foot, and a broken right shoulder. That was the least of the doctors’ worries, however. The life threatening damage occurred to Long’s midsection. The seatpost from the bike ripped Long’s perineum down the middle.

“I was open from the base of my penis down to my anus, and my rectum had been torn,” Long said. “The wound was so massive that the doctors could basically stick their hands through a hole in my abdomen and straight down to my anus.”

With all of the internal damage, the waste products in Long’s body threatened a major infection. Not only that but doctors had to keep up with the massive amount of blood loss. A normal human circulates roughly one and a half gallons of blood throughout the body. Twelve hours after the accident, Long had 35 units of blood pumped into him.

Long was given less than a 5% chance of survival.

In July that year, Long completed a 2.4-mile swim, a 112-mile bike ride, and a 26.2-mile run in the Lake Placid Ironman. Then weeks before the accident in November, he ran 3:13 in the New York City Marathon, which was good enough to qualify him for the Boston Marathon.

Long’s well-trained heart was exactly what saved him. Doctors said that his heart was accustomed to being pushed to the limit through all of the training and racing that he did.

“I was in tip-top cardio shape that allowed my body to withstand that amount of insult,” Long said.

The first post-accident memory Long has came in early January, weeks after being hit by the bus. Long was in a coma as his family celebrated Christmas and as the calendar year turned. Though awake and alive, Long felt that a part of him had died.

“After I survived this bus accident and all it did to me afterwards, it was a two-year battle with depression,” Long said. “I was grieving all the things I thought I lost.” 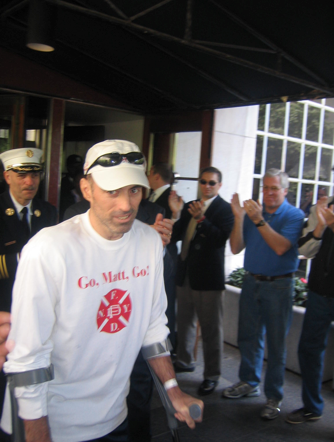 Long leaves the hospital for the first time.

Long was used to working long hours at Ladder 43, but the hours it would take for Long to even get out of the hospital and back into his apartment were much tougher.

He took his athlete mentality and applied it to occupational therapy and physical therapy. Finally on May 24, 2006, Long was cleared to return home.

Long’s left leg is mainly composed of titanium. He has mangled hammer toes on his left foot, and his right leg is a couple of inches shorter than his left leg. As one could imagine, running was not at the forefront of Long’s mind initially.

Nevertheless, Long got himself to the point where he could run the New York City Marathon again three years after his accident. It took him more than twice as long to complete the race as the last time he ran it, but this one was much sweeter.

In 2009, Long completed his first post-accident Ironman making it in just under the race’s 17-hour limit.

“I think people’s opinion of me is maybe I’m a little overconfident and think I can do anything, but that’s not the case,” Long said. “I question things and whether I’ll be able to beat outcomes or not. I’m just very persistent.”

One might imagine then that Long has little tolerance for people who say they don’t think they can achieve something.

“If you wake up in the morning and say you can’t do something or you’ll never do something, then you’re right,” Long said.

Long’s competitive nature, his “mind over matter” attitude, and his desire to constantly better himself allowed him to accomplish some great things after his accident. While Long lost some of his strength, speed, and quickness as an athlete, he’s gained other things in the process.

Long at the start line of the NYC Marathon.

“Before my accident I didn’t know what my purpose in life was,” Long added. “There were a lot of things that I wanted or was hoping to do.”

Now Long makes it his mission to inject hope into those who are struggling.

“I really feel like that’s my purpose in life now: To let people who are on edge of giving up know that they can make their lives better. I honestly believe that when one person finds their purpose in life, it’s probably the best gift that they ever receive,” Long said.

This December, as he always does, Long will return to New York – Presbyterian to thank his doctors, nurses, and physical therapists. Before he rolled through those automatic doors on a bloody gurney, Long moved quickly hoping to see everything and be everywhere at once. He was a typical New Yorker.

“So many good things have happened after my accident that it’s a life event that I couldn’t even ask not to have happen to me,” Long said.

New York doesn’t have anything left in the tank for Matt Long. In fact, the state just returned to its corner and tapped out.

Long, with his wife and three daughters by his side, raised both his arms in victory. However, he’s always ready to put the gloves back on for whatever comes next.

If you’d like to learn more about Matt Long, read his book “The Long Run.”

Also, check out his I Will Foundation, which helps people overcome adversity caused by illness or traumatic injury.