Editor’s Note: Our original story on military service dogs (published in 2013) stated that Shon Wilson spent 10 years as a Staff Sergeant in the 19th Special Forces Group, deploying multiple times to Afghanistan and Iraq. This story has been edited to correct his service record.

Dogs set the anchor of unconditional love and service in our lives. Even without words, they limit the drift of positivity, confidence, and hope. Perhaps no one knows that better than members of the military and their families.

Huỳnh’s fiance, Army SFC Liam Nevins, 32, was killed in Afghanistan on September 21st when enemy forces opened fire on his team while conducting range training. He was part of the Colorado Army National Guard’s 5th Battalion, 19th Special Forces Group, and was due to return home exactly one month before he was killed.

With four deployments to Iraq and Afghanistan under his belt, the Green Beret knew the countless benefits of war dogs. From bomb sniffing duties to locating and tracking enemy combatants, to protecting soldiers in unfriendly environments, to even jumping out of helicopters on airborne missions, Nevins leaned on the canines as much as he leaned on his human teammates.

“Liam definitely found companionship in the dogs he worked with in Afghanistan and he trusted them with his life,” Huỳnh said. “His loyalty to these dogs was similar to the loyalty he had to his men — he would have risked his life for them in any circumstance; they were his family.”

Nevins’ favorite dog overseas was a German Shepherd named Lynsey. She was new to Special Forces action, and needed additional training to be more aggressive, so Nevins put on a bite sleeve and let her attack his arm.

With war dogs providing such a major role in overseas survival, it’s easy to see why they are used in helping soldiers adjust to post-combat life as well.

That’s why NFL wide receiver Eric Decker and his wife, Jessie James, have launched Deckers Dogs, which provides support to Freedom Service Dogs’ Operation Freedom. The goal is to provide needed service dogs to returning military personnel and veterans with a service-connected disability.

The dogs are custom-trained for individual clients including veterans and active duty soldiers who have traumatic brain injuries, post traumatic stress disorder (PTSD), or spinal cord injuries among other things. The service members and veterans are matched with dogs that help them find a new level of independence in their post-combat life, whether it’s turning on a light switch or simply reducing anxiety levels.

“There’s this one guy who used to clear buildings in Afghanistan,” Decker said. “He came home, and he couldn’t go in his house without his dog there. He had to have a neighbor or a family member come over, go through the house, turn on all the lights and make sure it was safe for him. Now this dog is able to go inside, turn all the lights on, clear it for him, and bring him in.”

The dogs used in the program are rescued from shelters and trained by at-risk youth. It’s a win-win situation. The dogs learn the necessary commands, the kids learn how to communicate properly, and then the canines go on to help current and former service members.

The first “graduate” of the Deckers Dogs program was Rommy, a one-and-a-half year-old Labradoodle that was matched with Shon Wilson of Grand Junction, Colorado.

Wilson had a lot of trouble being in crowds and in social situations. Even going to a restaurant, he couldn’t sit with his back toward the door because he had to be able to see who was coming and going.

Wilson was recently matched with Rommy and described their initial meeting as “love at first sight” and as a “shot of adrenaline.”

“What I see Rommy helping me with is to get me out in the public,” Wilson said while at an Eric Decker holiday shopping trip for kids from the Boys and Girls Club. “Like this event here, I would never in a million years come to a Target at night with all these people because my stress just goes up. Having the dog is going to be able to hopefully release some of that stress so that when I go out to eat with my wife or go to a farmers market with lots of crowds, I’m not worried about the crowds anymore. I can rely on my dog to calm me down rather than getting upset.”

Decker’s wife and country singer, Jessie James, was born on a military base due to her father being a Colonel in the Air Force, so she knows the military lifestyle all too well. She caught up with Wilson after he was paired with Rommy.

“He’s just so overwhelmed with joy from Rommy and he cannot wait to share his story with everybody,” James said.  “These dogs are so powerful in a way that they can sense their owners’ emotions and what they’re feeling and going through when they’re scared.”

Nevins was shot in the shoulder and the knuckle in a separate attack one month before he was killed. He was awarded a Purple Heart for his valor. Though he opted to stay with his team to finish the mission, he and Huỳnh had planned on getting a dog together partially to help ease his transition back.

“Liam and I wanted to get a German Shepherd, Shiba Inu, or Akita,” Huỳnh said. “We wanted a dog with the same love for snow and adventure that we had, and we wanted her to be smart and somewhat aggressive.”

Huỳnh still plans on getting a dog for herself eventually, but for now, she borrows her good friend and former roommate’s Australian cattle dog, Shasta. 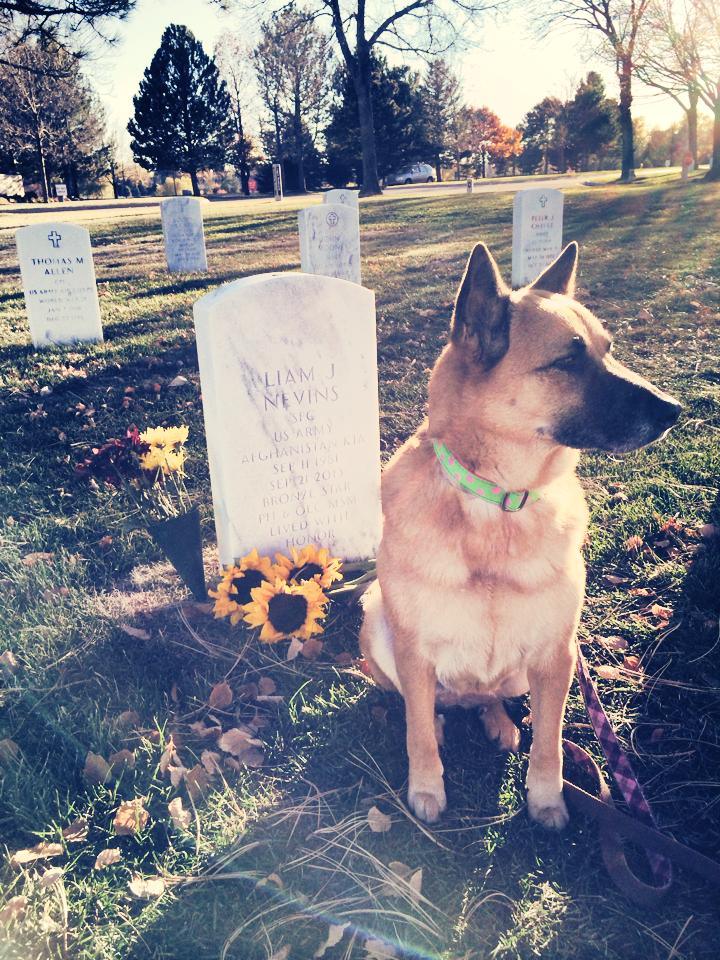 “She was a great source of entertainment for me and Liam when we started dating, and later on we established many great memories living with her,” Huỳnh said of Shasta. “She was definitely his favorite. Since Liam’s passing, Shasta has provided me much love and comfort. In a weird way, I really think she feels my grief and she knows he is gone. It’s been eight months since she’s seen him, but every time she comes over,  she still sits in the chair he used to sit in. For something that cannot talk, she really knows all the right words to say.”

For Huỳnh and Wilson, the unconditional love and service they get from the dogs in their lives is extremely important and powerful. However, it’s far from free.

If you’d like to support Deckers Dogs, financially or otherwise, go here. With just a $25 donation, you’ll become a member and receive an official Deckers Dogs t-shirt and a letter from Eric and Jessie. You’ll also be kept up to date with the latest on the dogs graduation from the program.