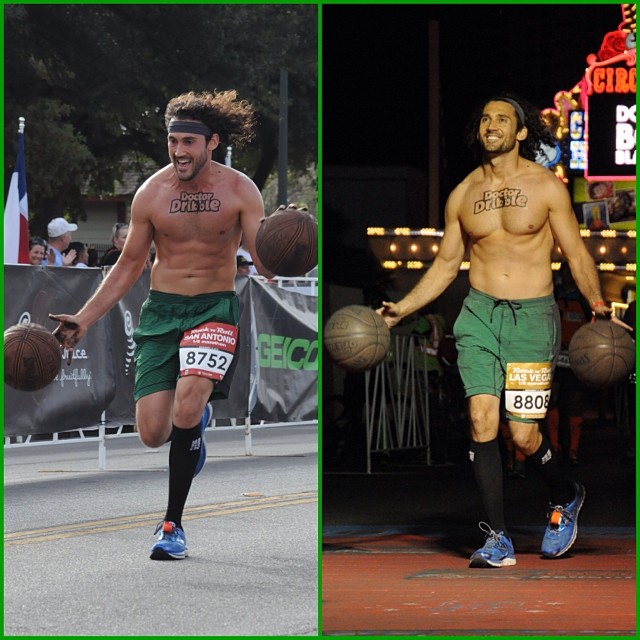 Running a marathon may be crazy, but to do it dribbling two basketballs continuously has to be insane, right?

If you’re Darren Weissman, 31, (a.k.a. Dr. Dribble), it’s just another opportunity to erase the line between insanity and inspiring.

As for whether his legs or his arms are more sore the day after a race?

“It depends on the wind,” Weissman said. “If the running conditions are good, then my legs are as sore as anyone else’s. If there’s an additional wind factor, my shoulders, my wrists, my forearms, my neck, my back are sore because I have to get very low and contract everything to keep control of the ball. The wind is like a defender trying to steal the ball from me for 26.2 miles.”

Weissman took his talents from the hardwood to the asphalt for the first time because of a dare. He signed up a week before the 2013 ING Miami Marathon and didn’t expect race directors to allow him to bring basketballs to the course.

“I was hoping they wouldn’t so somebody could stop me, but they didn’t,” Weissman said. “They encouraged it and said it was going to bring a lot of excitement to the race…I didn’t know if people were going to embrace me and enjoy having me out there on the course or if I was going to get in their way.”

Weismann said that people were inspired and awe struck by what he was doing. Runners who felt like they were on their last breathe suddenly saw him and started laughing.

“It really gives them a surge of energy that allows them to finish,” Weissman said. “That’s the reason why I continue to do it.”

Weissman didn’t just continue to casually run with two basketballs. In the Fort Lauderdale Marathon on Feb. 17, he set a Guinness World Record for running the fastest marathon while dribbling two basketballs with a time of 4 hours, 39 minutes and 12 seconds.

“Once I did that, I decided I was going to use that as an opportunity to raise money for different charities,” Weissman said. 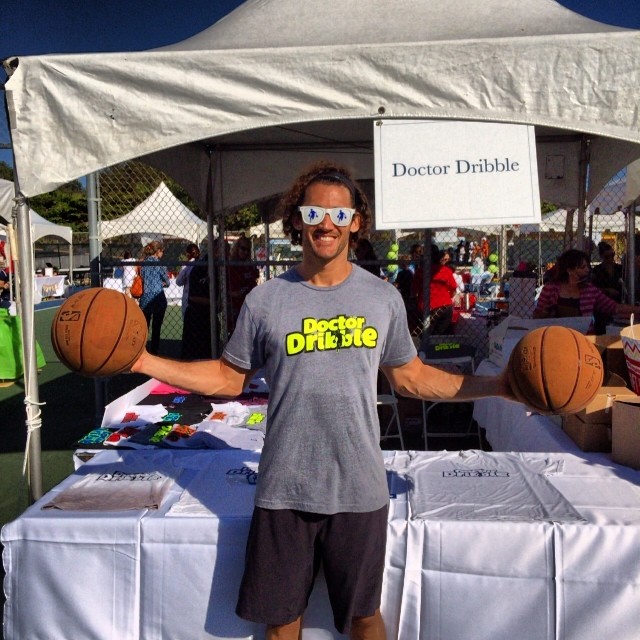 One charity close to the Miami based certified personal trainer and longtime private basketball coach’s heart is Our Kids, which supports foster children who may be abused or abandoned. The organization places these children in safe homes.

The cause really hit home for Weissman because when he was in his twenties, he fostered Jonathan Holton for five years. Weissman first met Holden when he was 13-years-old and on Weissman’s inner city travel team. Weissman gave Holden rides to and from practice, bought him meals, and served as a mentor.

“He was in a rough situation and asked if he could live with me,” Weissman said. “His aunt and his mother were very open to it. They were happy that I was taking care of him.”

Holden slept on a couch in Weissman’s one-bedroom apartment until he was 18-year-old. Weissman took care of Holden and trained him every day. Holden is now on a basketball scholarship at West Virginia University.

“It’s not about where somebody comes from,” Weissman said. “It’s where they want to go, and having the right support systems.”

Through basketball, Weissman has helped numerous individuals, including 25 who are currently on college scholarship or playing at the next level.

After Holden went to college, Weissman became an empty nester and decided to make some changes for himself.

“I decided that I had been neglecting my body for so long because I’ve been doing things for so many people, and I decided that year that he went to college that I was going to get in the best shape of my life.”

Weissman became a personal trainer and and an instructor at a South Miami gym.

He’s also one of the area’s best ball-handling coaches, demonstrated by the fact that he instructs players at all levels including Penny Hardaway and Tim Hardaway Jr.

Weissman developed his own handles because when he was younger he had to run or walk a mile just to get to a court, and he dribbled the entire way. His goal as a child was to play high school ball. Basketball in the Miami public schools was very competitive at the time. Weissman was just a few years behind NBA stars such as Udonis Haslem, Raja Bell, and Steve Blake in the system.

“I grew up watching them play in high school and knew that’s what I wanted to do,” Weissman said.

Weissman was a point guard on his high school team, but says that he settled on getting that far.

“What I tell kids now that I train is that you can do more. ‘Once you set a goal, and you reach that goal, are you going to stop there or are you going to do something more? Don’t be satisfied.'”

In addition to inspiring the kids that he coaches, Weissman speaks at children’s hospitals as well.

“I let them know that when they get out of the hospital, there’s nothing they can’t do because if I can go 26 miles with two basketballs without turning the ball over once, then they can get out and do anything they set their mind to,” Weissman said.

“I love what I do for a living and I’m happy I’m able to inspire people by running these marathons dribbling two basketballs.”

Weissman hears all kinds of jokes as he runs. Every comment from “Can you shoot?” to “Ball Hog” makes its way to Weissman’s ears. He easily jokes back.

Off the course, Weissman’s goal is less laughable.

“I want to inspire anyone to do whatever it is that they dream of doing because this is proof that anything is possible.”

Sound advice from Dr. Dribble, whose ultimate goal seems to be writing prescriptions for a well-lived life.