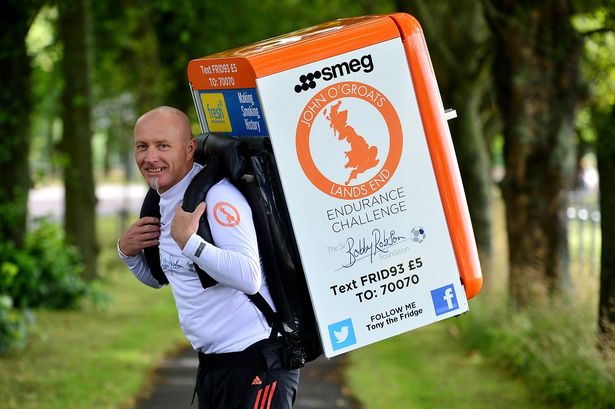 Running one marathon would be considered an accomplishment for most avid runners.

That’s why Tony “the Fridge” Morrison is running four in the span of 24 hours on April 13th, all with a 42-kilogram (92.6 pound) fridge on his back. He will begin by running the London Marathon, and then as everyone else crosses the finish line and heads for a pub, Morrison will continue running another three marathons.

For Mr. Morrison, who lives outside Newcastle in northeast England, it’s not about the achievement of running over 100 miles in a day; it’s about bringing awareness to a cause bigger than himself, and the pesky fridge that draws attention wherever he goes.

“Sometimes you run through the city and they think you’re a street entertainer; they don’t quite get what’s going on,” he said. When I’m going down lonely roads with a fridge on my back, it’s had a very emotional effect on lots of people. That’s been the wonderful part of this journey. The sense of community that’s around the world.”

Mr. Morrison, who turns 50 in April, runs to raise money for cancer research, a disease that has taken the lives of many of his relatives.

However, his motivation is more than personal — he believes there will be a day when cancer can be beaten.

“I choose my journey to help cancer research to be proactive,” he said. “I do believe we can end this disease. The more we can do research, the quicker we can get to that conclusion.”

“The whole reason for the fridge is I wanted to demonstrate the burden of cancer,” he said. “I realized just what an ordeal it was to carry this thing on my back. How stressful and the struggle, and the wind that would twist my body in different directions it’s such a terrible ordeal.

“You think of that burden on your shoulders when you’ve lost loved ones to cancer, been decimated as a family,” he added. “I wanted to pay tribute to the people who were already fighting the disease. I wanted to take on the impossible journeys with the hope that they would be inspired to get through their impossible journeys.”

The fridge poses obvious challenges to Mr. Morrison, but none greater than the risk of death every time he straps it onto his back.

“This is something that could genuinely kill me,” he said.  “I have to get everything right on the day. I have to get the nutrition right, [because] so many things can go wrong.

“There’s no certainty that I will get to the other side,” he added. In fact there probably is a certainty that I’ll get some kind of significant injury along the way. I’d be surprised if I didn’t.”

He’s fallen several times and sustained injuries ranging from a broken hand and wrist to breaking his left femur to knocking himself unconscious “five or six times.” 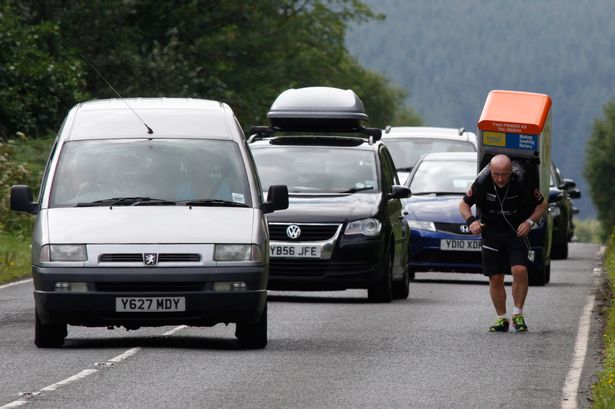 “It’s very unforgiving when 42kg of a metal box hits you on the head,” he said. “Also, the harness is an old U.S. military ammo box carrier. It served in WW2. It was an antique.”

Despite the injuries, Mr. Morrison — better known many by his nickname “The Fridge” — continues to train his body for enduring the most extreme challenges, such as running the length of Great Britain last year.

His first reaction wasn’t to stop, but rather to make sure my leg was protected during training.

“I had to lay off the miles and build my core with weights and kettle bells,” he said. “I have a fantastic machine called a Jacob’s Ladder, a Jacob’s Ladder is basically a machine to do a bear crawl.

You climb each rail basically a foot apart — it’s really just a climbing machine and it’s a fantastic all-around body workout,” he explained. “It’s a great way of getting fit while coming back from injury.”

He runs about 80 miles a week now in preparation for his next challenge in London.

Mr. Morrison is self-described as “quite a fit chap,” who’s been running ever since he was a little boy.

He got into the sport “out of despair” at the age of 12, when his father died in a car accident.

“Running was a way of escaping,” he admitted. I was kind of emotionally disturbed from this tragedy, so when I got stressed, I would just run and run and run.

“I would run to places that I used to go camping on holiday with my dad,” he added. “I would run 30 to 40 miles from my house just to escape from everything.”

He wasn’t running for exercise, but it certainly helped him get where he is today.

“It was something I did to escape my world,” he said. “It was really hard when I started, but then I achieved a level of fitness.”

Over time he came to terms with the loss, and the subsequent pain it had brought into his world. He decided to focus on fundraising and volunteering, specifically fighting the battle against cancer.

“I wanted to do something significant,” he said.

It was hard getting donations at first so that’s when the fridge came into to play, something he calls “a bit of a crazy bet.”

“I said I would run a half marathon with a fridge and I got a lot of donations,” he recalled the internal bet. “It was on the news in 17 countries; I realized then that I’ve got something here. From that, all of these crazy adventures over the years have evolved.”

The upcoming race in April will be his tribute “to all the wonderful people around the world that have given me so many useful remarks and messages, and donations.”

“The world is full of people that care; 95% of people out there care about everybody else and when they see somebody doing something good, they respond in a positive way,” he said. “If you get up off your backside and something positive for a positive reason, the world gets behind you.”

Although this has been described as his “final race” in Europe, Mr. Morrison isn’t done quite yet.

He plans to run across America, perhaps as soon as next year. It won’t be a marathon run, but the fridge will be coming with him — and hopefully finding it’s final resting place.

“There’s a lake in California called Lake Zaca,” he said. “My uncle immigrated to America and he died of cancer. Before he died, he told me, ‘When you do run across America, Tony, make sure you have a swim in Lake Zaca for me.’”

“That may be just the lake that the fridge sinks to the bottom in,” Mr. Morrison concludes. “Leaving the fridge in the bottom of the lake for Uncle Charles may be the way to do it.”