Dr. David King Ran A 3:12 Boston Marathon, Then Sprinted To OR To Save Bombing Victims

Home/The Big Play/Dr. David King Ran A 3:12 Boston Marathon, Then Sprinted To OR To Save Bombing Victims
Previous Next

Dr. David King Ran A 3:12 Boston Marathon, Then Sprinted To OR To Save Bombing Victims

A marathon is typically comprised of many races within one. Sometimes the race is just getting to the start line. Sometimes the race begins at mile 20 when the proverbial wall pops up and threatens every millimeter of quadriceps muscle that has already endured 20 miles worth of asphalt. In rare cases, the race becomes real after after crossing the finish line.

On April 15, 2013, Massachusetts General Hospital trauma surgeon Dr. David King ran the Boston Marathon in 3 hours, 12 minutes. It was a speedy time for the then 39-year-old doctor, who afterwards hopped in a home-bound cab with his family looking forward to spending the rest of the day with his legs kicked up and noshing on some pizza.

Then the texts started flying in on the ride home.

“Heard there was an explosion.”

Unaware of the marathon bombings, King wasn’t able to bring up any news websites on his phone, but he told his wife that he thought that he should head to the hospital.

Just 90 seconds upon walking through the doors, the first round of victims from the bombings started to arrive. This was the start of King’s second marathon of the day.

“It was certainly more challenging than the average day,” King said. “I had just run the course. I came straight here tired and dehydrated, and calorically insufficient.”

King’s team treated 43 victims, and the double marathon man himself was on his feet for 30 hours performing life-saving surgeries.

Naturally, the question had to be asked: “Was it your toughest or most draining day at work, Dr. King?”

King deployed to Afghanistan and Iraq as a U.S. Army lieutenant colonel and combat surgeon before he began working at Mass General in 2008. There was a bombing in a common outpost while he was in Afghanistan and he said that he never worked so hard in his life that day.

As for how his experience overseas helped him on that earth-rattling April day, King said that it’s all relative.

“The types of injuries were not identical, but they were similar. Having been deployed maybe eliminated a lot of the shock value that came with that,” King said. “The War on Terror has been going on for so long that the lessons learned on the battlefield are well translated back into civilian medicine. So maybe guys who have never been down range who are seeing those kinds of injuries understand in general the best evidence-based approach to taking care of them.”

The trauma load was certainly heightened on that devastating Monday, but the struggle of having just run a marathon himself was at the very back of his mind.

“It’s the same struggle you have every day at work,” King said. “Nobody wants to see anybody die. You’re struggling to take people who are hanging to life by a thread and throw them a rope, and pull them back.”

Of the 43 patients brought through the doors as a result of the bombings, 13 were severely injured and needed five, 10, or even 15 operations in the coming months. Although many of the victims received life-altering treatment during that time period, none of them died.

King, a Woonsocket, R.I. native, was an emergency medical technician in high school. However, once he entered college, he decided to study electrical engineering.

“For me, there was never a single moment or an epiphany,” King said of how he decided to change course and study medicine. “It was more of an evolution. It sort of started with dissatisfaction in engineering. Somewhere along the way, I decided I was interested in medicine. I changed my major to biology, and applied and completed medical school.”

King is the regional presidential surgeon, which means if the President of the United States gets hurt in or around Boston, King would coordinate his care. That future responsibility was probably the furthest thing from his mind as a freshman engineering student. 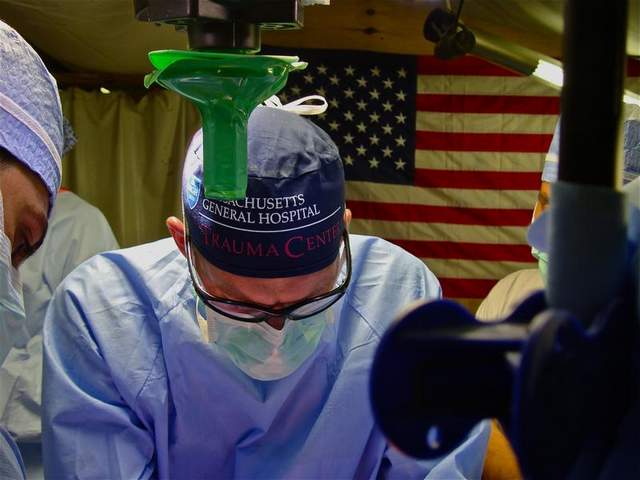 President Obama visited the hospital three days after the bombings, and King was the one to take him around and introduce him to patients.

In the ensuing days, King gave numerous interviews to news outlets across the country. There was no ‘rest day’ to be had.

Over the days, weeks, and months that Dr. King treated Boston Marathon bombing victims, he became especially close to some.

“I would say that I’m extremely connected to a couple of patients in particular, but it’s hard not to say you don’t feel some kind of bond with everybody that you had an exposure to,” King said.

In some ways, King used last year’s race day experience as fuel for his training for the 2014 race.

“It’s hard to be engaged in that and not be effected,” King said. “You can’t be around these survivors and not be inspired by their stories, and their attitudes. On my 22 mile training runs through the White Mountains when you think you can’t possibly make it up one more hill going this fast, you reflect on what the survivors have gone through and you think, really? I’m about to complain about this? Some of these folks don’t have legs.”

While King is a great surgeon and distance runner, his reach extends beyond his his race day story.

“Ten years ago, I was all about being a surgeon,” King said. “I just wanted to operate and help people. Now, not that that’s not a good goal, but now I feel like I have a little more scope or maturity. I feel like my goal is a little more abstract than that. My personal goal is to be the best father I can be to my daughters. My professional goal is I want to inspire people to make good choices, to avoid the kinds of behaviors that quite honestly will end up putting you in front of me on my operating room table. It’s not just a running thing. It’s not just encouraging people to exercise and eat well. It’s things like encouraging people to wear their seatbelt, to not text while driving, and to be heads up when you’re walking. I feel like I can have a bigger purpose than just helping one person at a time.”

There you have it. Doctor’s orders.

As Dr. King and the bombing victims have taught us, endurance and tenacity come in the form of many short races rather than one long one. Breaking it down (whatever ‘it’ is) before it breaks you down appears to be the way to go to get to any ‘finish’ line.