When athletes play for reasons bigger than themselves, the stage becomes set for heroic performances to take place.

“You go out every game and every practice, you clear your mind, and you just play to entertain the Creator,” University of Denver freshman lacrosse player Zach Miller said. “The Creator made the game as medicine for the people who play and watch, so you play with the best ability that you can.”

It’s a unique perspective for a 19-year-old star college athlete, but it’s a common one if you look at where Miller came from.

Miller grew up on an American Indian reservation as a member of the Seneca Nation of New York. The Seneca Nation is one of the original Five Nations of the Iroquois Confederacy, and they inhabit land in Western New York.

“Growing up on the ‘res,’ you always have a bunch of different activities to do,” Miller said. “You’re always outdoors with family and friends doing things like hunting, fishing, and trapping. Everything you do is outdoors. Now at the University of Denver, it’s more of a city type of atmosphere where you’re doing activities with your friends in a city environment.”

Miller’s college life in Denver is a far cry from how he grew up. One time after a small argument with his mother, Miller asked if he could go hunting to clear his head. He set out for small game, but encountered something much larger.

“I walk into the woods and I saw a black bear so I shot it,” Miller said. “I called my parents to come over and told them that I walked into a bear. We sent it to taxidermy and used the meat for sausage and stuff like that. Then we got a bear rug made out of it.”

The reason for Miller’s transition to city life is a good one. He excels at the sport that his ancestors created. Lacrosse began in Canada in the 17th century. That’s when the balls were made out of either wood or deerskin stuffed with hair.

“When you’re born in the Native culture, you get a little wooden lacrosse stick right away,” Miller said. “Lacrosse becomes a very big part of your life from the start. Kids start playing as soon as they can walk and hold a stick in their hands.”

Miller certainly looks like he was born with a stick in his hands. In the Big East Championship against Villanova on Saturday, Miller scored a team-high four goals and had one assist in the Pioneers’ 14-7 win. Miller has been a big-time scorer for the Pioneers all season.

Miller may be on the right path now, but he struggled on his way to getting off the reservation, and on the fast road to a better education. 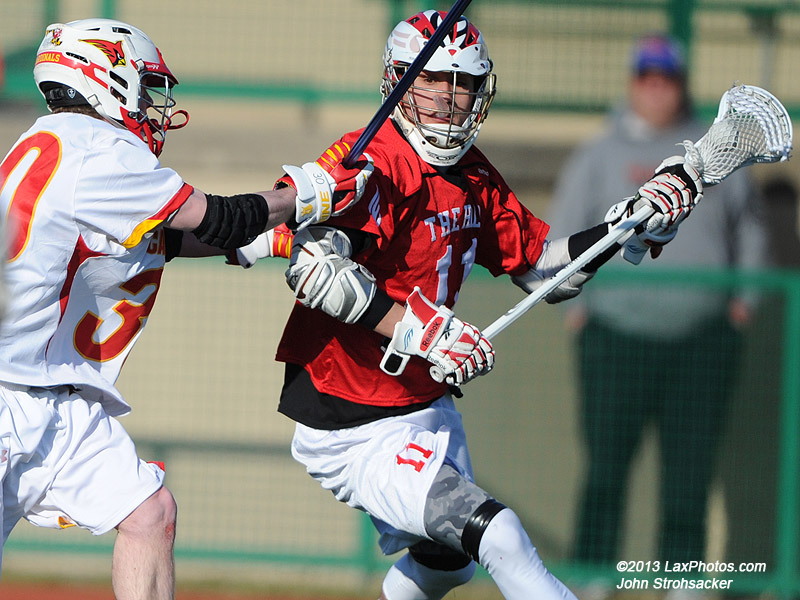 His family raised over $100,000 via casino annuity checks in order send Miller to The Hill Academy in Ontario, which is an independent high school for dedicated student-athletes who are looking to take their academic and athletic performance to the next level. It was there that Miller found his way in the classroom. It was also there that division I college programs took notice of his skills on the field.

DU coach Bill Tierney discovered Miller because he had ties to The Hill Academy after recruiting senior Jeremy Noble out of the school.

Miller hasn’t declared a major yet at DU, but he has aspirations to play Major League Lacrosse once he graduates.

Miller has already beat the odds so to speak. He got off the reservation and into college when so many fall into problems with drugs and alcohol.

“There are plenty of stories where kids have the intention of going off to college, but just got caught up in drugs and alcohol,” Miller said. “They used to be good players, but now they’ve faded away from the game. They don’t have jobs or anything. They’re at the bars every night wondering what they could have been.”

Miller is actually the first kid to leave the reservation and go to school.

“My purpose right now is to be a role model,” Miller said. “Me being successful will hopefully give others the motivation and the drive to do well in school, leave the reservation, and get an education and be successful in their life.”

Miller’s play on the field may be ‘medicine’ for the spectators and for a higher power, but his desire to better himself as a person may be the best medicine for his community back home.