Broncos Fan Watches Team While Fighting His Own Battle

Broncos Fan Watches Team While Fighting His Own Battle

A No. 18 orange jersey was delicately draped across the end of a white uniform hospital bed as “I Go Back” by Kenny Cheney blasted from the speakers. This isn’t Peyton Manning’s story, however. Instead of “Manning” sewn across the back of the jersey, it was an authentic “Batson.”

Galen Batson has been handed a lemon or two in life. Forget the lemonade, however. Batson has figured out how to turn a sour lemon into a sweet Denver Broncos orange.

As the Broncos prepare to duke it out with the New Orleans Saints Sunday night, Batson, a 20-year-old cancer patient at Children’s Hospital Colorado, is engaged in a much bigger fight, one where there is no other option but to win.

Batson has an aggressive tumor in his brain called Glioblastoma (GBM). The prognosis for patients with GBM is grim.

“We have few options ranging from palliative to experimental, and are considering them carefully,” Galen’s mom, Deb Batson said.

The story of this disease did not begin when Galen started having headaches a few weeks ago which prompted a CT scan and an MRI. The story began ten years ago when Galen was diagnosed with Philadelphia chromosome-positive acute lymphoblastic leukemia (PH+ ALL). At the age of 10, Galen received total body irradiation to help prepare him for the stem cell transplant that saved his life (Galen’s older brother, Sean, was the stem cell donor). It’s likely that this radiation is the cause of today’s invasive brain tumor.

“When it happened the first time, I was 14, 15, and 16 (years old),” Galen’s sister, Kelsey said. “Sean and I were in high school in another town, so there were times when we couldn’t see him very much.”

Although shocking and painful, the recent diagnosis is nothing new for the Batson family. It’s yet another obstacle rearing its ugly head.

“(We’re) settling in to what is and what might be,” Deb said of the recent diagnosis. 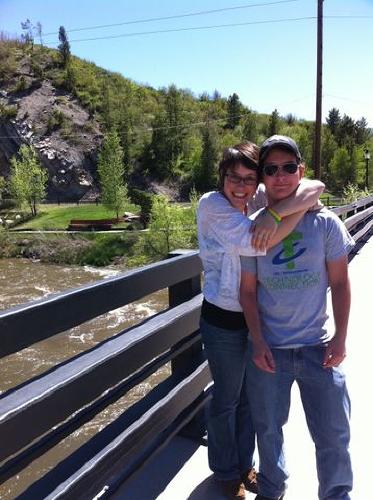 Kelsey, 24, moved back from London where she just started graduate school to be closer to her youngest brother. Sean, 23, hopped on one of the first flights from Washington D.C. where he was attending law school. Banding together is what the Batson’s do best.

A Colorado native and a junior at Tulane University in New Orleans, Galen has a deeply rooted interest in Sunday night’s contest. It’s his hometown team vs. his transplant team.

Make no mistake about it though. The Broncos’ sweatpants that Galen has been sporting since his brain surgery Monday give clear indication as to where his allegiance lies.

“He’s one of the most diehard fans the Broncos have I think,” Kelsey said of her brother. “Sean had a Terrell Davis jersey and Galen had (John) Elway, and they probably didn’t take them off for five years. They were always wearing them, always running plays in the backyard.”

Galen worked on his spirals, and had Sean diving all over the place for “winning touchdown passes.” Galen may have been the strong armed backyard quarterback in their Steamboat neighborhood growing up, but his grit-and-grind attitude was more reminiscent of a lineman deep in the trenches.

“He was always the one we thought was going to play for the Broncos or for a national team because he was so scrappy and strong when he was little,” Kelsey said.

That’s what helped him beat cancer the first time. ‘The size of the fight in the dog’ analogy has never held more true. 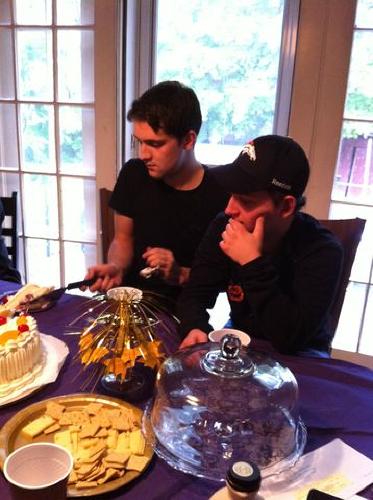 As for the current battle going on, the Batson family remains bedside watching, waiting, wondering, and most of all wishing.

“It’s been pretty hard to watch him change,” Kelsey said after Galen’s surgery, which removed part of the tumor from his frontal lobe. “He has a flat affect now, and doesn’t have much inhibition in terms of what comes out of his mouth, and he’s in a lot of pain all the time. It’s hard to watch that every day because he came in here ten days ago fit, chiseled, and just a healthy young man, and now can’t get out of bed. So it’s really hard to watch him change like that.”

Like his favorite team, Galen has turned defeats into victories in the past. If there’s one thing he learned from the Broncos over the years, it’s to keep giving his all whether or not the outcome matches his efforts.

“We’re trying not to focus on prognosis because it takes all the hope out of the equation,” Kelsey said.

Focusing instead on all of the support that they have received throughout the community is one of the lights in this dark alley.

“In the hospital you’re pretty much a body and every effort is focused on adjusting meds, procedures, and equipment to heal every sign and symptom,” Deb said. “So family and friends get the job of healing mind and soul and heart.”

Call it bonding by burden. As much as the community wants to prevent Galen’s pain and alleviate circumstances, it’s a difficult thing to do. Instead, people from near and far have made it their purpose to help the family endure. Whether it’s solidarity in silence or in loud actions, simply knowing that there are people alongside you in the journey is one of the greatest comforts in a time like this.

“This time around, it’s pretty amazing to see all the support that comes out at times like this from my mom’s community to Galen’s school, to Camp Wapiyapi, which has shown him so much fight and courage,” Kelsey said. “He’s incredibly well supported and we’re very lucky to be in the position we are, surrounded by amazing people who have big hearts and who love him a lot.”

No matter how murky the waters, endurance and hope are always possible. And with that, anything is possible.