As humans, we have an interesting relationship with time. We think about it a lot. How to spend it, how to make the most of it, how to make peace with it. Really, the only reason for time is so that things don’t happen to us all at once.

After all, we’re a culmination of all our experiences, good or bad.

“Do you set off the metal detector at the airport?” I asked curiously as we sat around a small table at a Denver area Starbucks.

“No, I wish I did,” she quietly remarked with a smile on her freckled face and a flaky croissant in her hand. 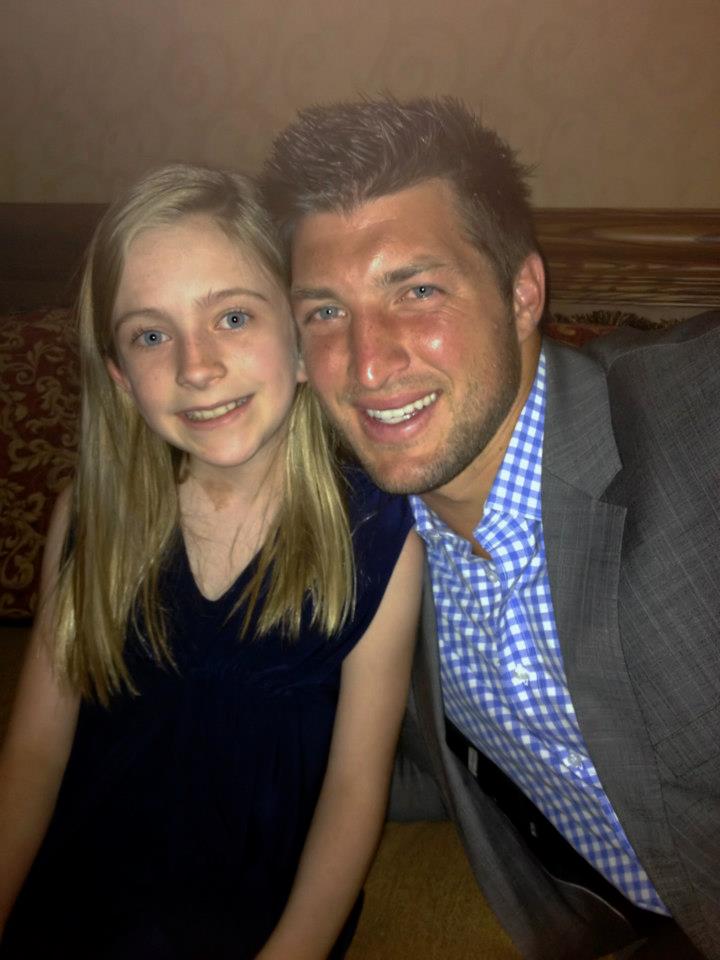 Presli Collins, then 10-years-old, from Parker, Colorado was envied by throngs of women for at least for one night. Make no mistake, however. Not many could endure the life that she’s already lived away from that one night.

Presli was diagnosed with neurofibromatosis (NF1 to be more specific) in 2007. NF1 is a genetic disorder that causes tumors to grow in the nervous system. She was initially diagnosed when doctors found a mass in her back and cafe au lait spots on her skin (coffee like stains which are characteristic of NF). After numerous MRIs, they also found a chiari malformation in her brain. Presli had brain surgery in 2008 to fix the malformation and at the same time, had the mass removed from her back.

“It’s just one of those things where we don’t know what’s next,” Presli’s father, Andy Collins, said.

NF1 can cause bone abnormalities as well. She had a posterior and anterior spinal fusion in August of 2011 to help correct her scoliosis. Her  post-surgical X-ray looks like she has a full extension ladder climbing up her spine, with screws so big that I was convinced  that they could also hold the Eiffel Tower together.

Presli was Tim Tebow’s date to the Cartoon Network Hall of Game awards show in February of 2012. She made headlines around the country when she got dressed up in her pink dress to walk the “green carpet” with arguably the most popular name around.

“We had to go out and buy a dress because I didn’t have any fancy ones. There were five choices and that was the only one that was comfortable,” Presli said of the dress that she selected.

Comfort was what that special night was all about.

Presli and her father were flown out to California thanks to the Tim Tebow Foundation’s Wish 15 program (W15H) in partnership with Dreams Come True. The organizations were tipped off to Presli’s situation thanks to an email from one of Andy’s co-workers.

Presli, Andy, and Tebow piled into the van that brought them to the awards show.

Tebow made sure to keep Presli by his side all night long. After all, he needed her help.

Tebow walked into the green room not knowing any of the Disney stars that were in attendance.

“I knew almost everyone there!” Presli exclaimed.

She went on to introduce Tebow to all of the Disney stars, which she knew by their real names and their character names. She also got to meet athletes like Shaquille O’Neal, Matt Kemp, and Hope Solo.

Of course, Presli’s favorite part of the trip was meeting Tebow.

“It was so cool and super amazing,” Presli said. “He’s super nice. A thousand times nicer than you think he is.”

In the buffet line, Tebow loaded Presli’s plate up with so much food that it nearly went past her eyeballs. Before dinner was halfway over, Tebow pointed out a chocolate fountain. The two made their way over to kill that sweet tooth and ultimately make others realize that life is too short not to eat dessert before finishing your dinner.

Years down the road when people ask Presli about her first date, she can tell them that she went out with Tim Tebow.

“I asked her on the plane ride over if she was nervous,” Andy said. “She said ‘No daddy, I’m just really happy.’ Compared to what she’s been through, what’s there to be afraid of?”

Rather than being sent to genetics, hematology, orthopedics, or ophthalmology, Presli was sent to California for two days to embark on a dream come true. It was a trip that she had to keep a secret until it was all said and done.

“One of my teachers asked ‘what are you doing this weekend?” Presli said. “I said ‘I can not tell you. I can not!”

Of course Presli’s three siblings, Zac, then 12-years-old, and twins Baxter and Bailey , who were 8-years-old at the time, were a tad jealous, but Tebow made sure to place a call to them. Presli’s mother, Lisa, spoke to him as well. After all, NF1 impacts the entire family.

“The general surgeon told us to be ready for the wildest roller coaster of your life,” Andy said. ”You just brace yourself. We’re almost to the point of numbness. It’s just the unknown now.”

The day that Presli and Andy arrived in California, they took an early morning stroll along a Santa Monica beach. Their goal? Look for the ideal seashell. The very first one that Presli found was perfectly shaped and smooth.

“That’s her,” Andy said with a smirk and a head shake. “Perfect.”

The two took the seashell, something that’s fragile and portable, as a symbol of the magnitude of the ocean and their time together. Those memories will remain in their minds for a time when they need to escape from the turbulent seas that NF1 can be.

STORY UPDATE: Presli’s date with Tebow wasn’t just a one time deal. In April 2013, he invited her and the entire Collins family to be his special guests at The Broadmoor in Colorado Springs, where he received the Colorado Springs Christian Schools Lions’ Heart Award in front of nearly 2,000 people. After the ceremony, Tebow spent an hour back stage with Presli and her family catching up, telling stories, and taking pictures. It was a “second date” that Presli will never forget, and one that was especially memorable because her entire family got to experience it, too. 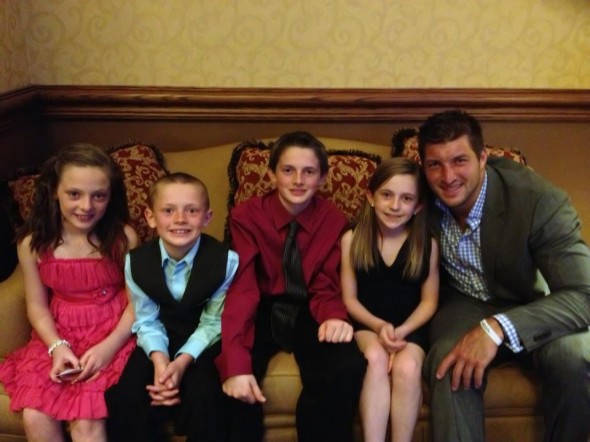