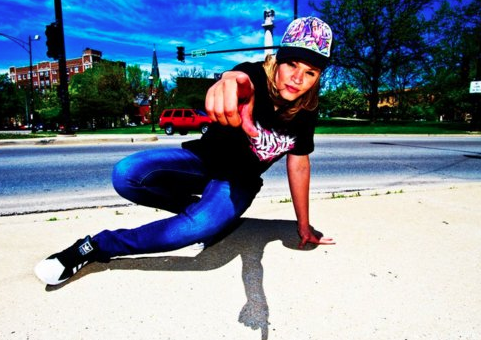 Some say that dance is the relationship between the body and the soul. It’s purpose isn’t to get to a single spot on the floor, but to enjoy each and every step along the way.

For Auristerla Nunez, more affectionately known as “Lady Champ” in the hip hop community, dance is much more than that. She tremendously appreciates every two-step, every “flare,” and every “freeze” she gets to perform.

The Chicago native and breakdancing legend made a living off of being a professional breakdancer. She started dancing in the early 90’s and was able to support her daughter, Yetzenia, and son, Benjamin, with her dancing career.

Then in 2007, when her kids were 13 and 9, a debilitating virus called transverse myelitis attacked Lady Champ’s spinal cord.

Transverse myelitis is a rare inflammatory disease, which causes varying degrees of weakness and sensory alterations to the spinal cord. There are between one and eight new cases per million every year.

Determined not let her illness prevent her from not dancing permanently, Lady Champ worked vigorously in rehab to regain control feeling and movement.

One tiny step at a time, I fought back. In the beginning, I would engage the brakes on my wheelchair, put my walker in front of my chair and lift myself up with my arms. It took incredible effort to get into a standing position, but I was able to get there for a split second before collapsing back into my chair. After what seemed to be a 1,000 tries, I was able to remain standing for a second or two.

As soon as I could stand for a few seconds, I moved on to attempting to take small steps. Upon standing, I would take a few steps with my walker, immediately collapsing after the first few tries. But slowly, one step turned into two, three, four. Those first steps meant the world to me. – Lady Champ (Chicago Sun Times)

Through the process, Lady Champ had to adjust to being a new kind of mother to her children as well.

“I was still able to do small things with them,” Lady Champ said. “It was a lot of work and very demanding, but I got through it.”

Indeed, she got through it. Seven years later, Lady Champ nervously toed the starting line at the Wings for Life World Run in Denver at 4:00 a.m. The Red Bull sponsored race united runners from all over the world to run at the same time for those who can’t. One-hundred percent of the proceeds from the race went to research for curing spinal cord injury.

Due to scarring on her spinal cord, Lady Champ is still unable to feel her feet. She also battles daily stiffness and pain. However, on that early May morning in the Mile High City, Lady Champ was ready to run her first race miles ever.

“My purpose in life is to show people that you can make the impossible, possible,” Lady Champ said after completing the course. “The doctors told me I was never going to walk again and look at me now, walking, breakdancing, and running.”

Lady Champ teaches kids how to breakdance at Las Tablas Performing Arts Studio in Chicago, judges competitions, and she is also a speaker on panels aimed at inspiring young people all over the world.

A lot of times progress seems to be slow and silent. Only down the road does it speed up and shout in your face, saying “Hey, look how far you’ve come!” For Lady Champ, progress showed up in her body and her soul, simply grateful for regaining what she had once lost.