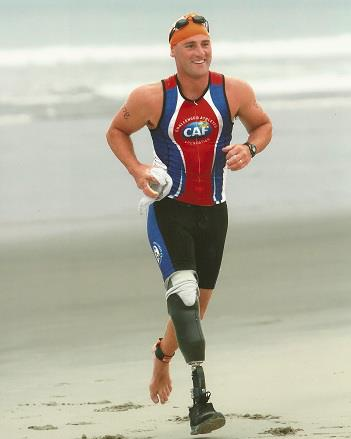 As children, we inherently know and disregard that while learning to run, we may fall. Yet as we age, many of us begin to fear failure, and as a result, we avoid the challenges which offer the opportunity for growth. Some of the challenges in our lives are not optional, but the way we handle them always is.

Retired Marine Captain and amputee Ironman, Eric McElvenny is a man who believes in owning your personal circumstance, no matter good or how difficult it may be.

In December of 2011, during his final tour in Afghanistan, McElvenny was injured on a routine patrol when he stepped on an improvised explosion device. His wounds from the explosion were so severe that they resulted in the amputation of his right leg below the knee. It was an injury which ended his service in the Marine Corps, and at first, he was unsure of what his future would hold. That’s when the idea for an Ironman triathlon jumped into his head.

Having no background in endurance sports, McElvenny, was starting from scratch. In this new life after the loss of his leg, his goal became the Ironman: a 2.4-mile swim, 112-mile bike, and 26.2-mile run. It was an endurance race which he said he had never considered doing prior to his injury, but recalled it was the biggest challenge he could think of at the time. Part of what helped him get started was the ability to take some of the skills he had learned in the military and apply them to the new task at hand.

“As a Marine and as an infantry officer, it’s both physically and mentally demanding,” McElvenny said. “You have to be able to be physically strong, but at the same time you have to be able to keep thinking. The same thing happens in an Ironman; it’s easy to zone out, but it’s helpful to put in the extra effort to think. You have to take specific steps toward meeting your goals. Have the initiative, and get it done.”

Pausing for a moment, McElvenny laughed, “Very different uniforms though.”

It was that challenge of completing an Ironman which provided McElvenny with the motivation he needed to get up out of the hospital bed, and literally, running again. 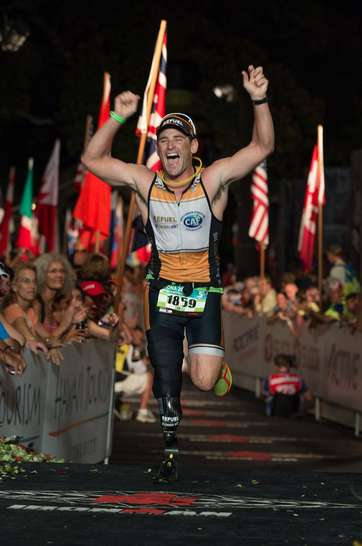 Ten months after the amputation and with the help of the Challenged Athletes Foundation (CAF) – Operation Rebound, McElvenny completed his first marathon at the Marine Corps Marathon with a time of 4 hours and 25 minutes. His continued hard work and dedication earned him a spot to train with former NFL player Hines Ward for the Ironman World Championship with the Built with Chocolate Milk campaign, and in October of 2013, he crossed the Ironman finish line in Kona, Hawaii with an impressive time of 11 hours and 54 minutes.

It was a race which he remembers vividly for both its highs and lows.

“At mile 19, I basically hit a wall and had to make a decision to take my running leg off because my prosthetic was full of sweat, and it was hurting, “McElvenny said. “Things weren’t going well and I was trying to figure out how I was going to finish the next seven miles. I sat down and I took my leg off, and it felt so good to let my limb breathe a little bit. I sat there for maybe two or three minutes, and thought to myself, I’m not going to be able to keep going if I don’t get back up. I grabbed my leg and tried to put it on, but it didn’t fit. My limb had swelled up so quickly that I couldn’t get my prosthetic back on. Everything in my body hurt, and I was sitting on the side of the road and couldn’t even get my run leg on. I felt so defeated at that point in time.”

Though he felt defeated in that moment, McElvenny was able to keep composed and eventually re-attached the prosthetic to his limb, allowing him to keep moving and reach the finish line in better spirits.

It was the first of four Ironman finish lines McElvenny has crossed so far. 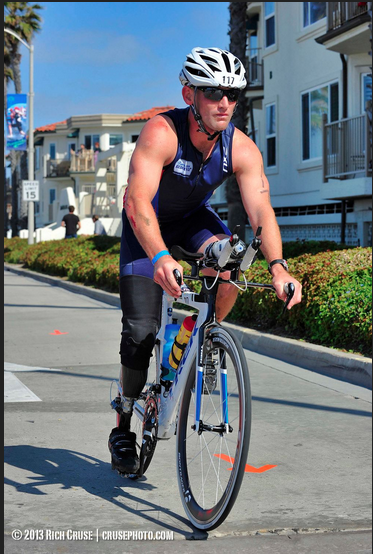 The grueling Ironman is not for the faint of heart, and with the added challenge of wearing prosthetics, the race has had a steep learning curve. Foremost, the prosthetics have to fit perfectly since they are hard and have no give, but the limb can change and so it requires frequent monitoring for fit. With any tissue breakdown on the limb from a poor fit comes a risk of dangerous staph infections which could force McElvenny to take time off from training or racing, potentially for weeks.

The consequences of a poorly fitted leg greatly outweigh the blisters an able-bodied athlete may encounter with ill-fitting shoes, so McElvenny sometimes sees his prosthetist, Peter Harsch, a 14-time Ironman finisher himself, two times a week to ensure a proper fit.

“I swim without a leg, I bike in a bike leg, and then I run with a run leg. So we’re talking about a couple of different legs that I’m wearing, and then during transitions, sometimes I wear a special transition leg,” McElvenny said. “So all of those legs, and the one I walk in; I need to keep them fitting well.”

He shared his gratitude for his close relationship with Harsch, who he says is a source of inspiration for him on his journey as an amputee endurance athlete.

“He works with mostly military veterans, but he wasn’t in the military himself,” McElvenny said. “He goes out of his way to make sure we are getting back into our lives. I haven’t met too many people who have his passion, to drop what he’s doing at any given second to help one of us out.”

McElvenny is gracious about his accomplishments, genuine, and authentic. Listening to him describe his experiences and the challenges he has overcome, he has a clear ability to instill confidence in others with ease, a quality which he puts to good use as a motivational speaker for schools and corporate events.

Outside of the Ironmans, his favorite race is called the CAF San Diego Triathlon Challenge, a non-competitive event which he favors because of the opportunity to see kids and people of all ages in wheelchairs or prosthetics, smiling and enjoying themselves.

“In every race there is a point when I ask myself, “Why am I doing this?”” McElvenny said.

To answer his question, what he has found in the CAF San Diego Triathlon Challenge as well as other races, is that he can be both a serious competitor and also value and appreciate the small moments to stay positive. If he becomes discouraged, he reminds himself about his friend and fellow amputee, Dan Riley, who was also a Marine wounded in Afghanistan about a year before him. They both recovered in the same hospital. 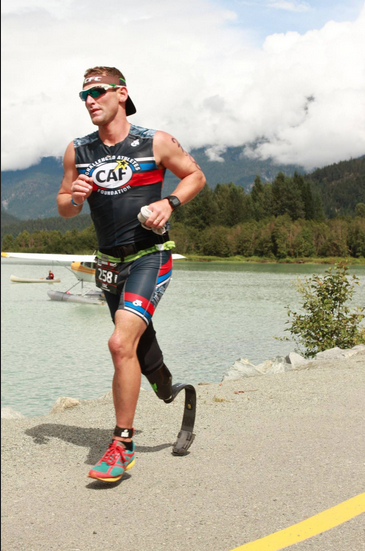 “I met Dan early on in my recovery,” McElvenny said, “His attitude was and is, amazing. He is a double above-the-knee amputee, which makes my single below knee amputee look like a papercut. He is also missing three fingers on one hand. He is very positive, and I’ve never seen him complain about anything. He does triathlons, he skis, he surfs, and he is very independent. Anytime I have a bad day with my single below-the-knee amputation, I think about Dan and the obstacles he has. He doesn’t complain, he is just grateful for the things he is able to do. He inspires me.”

Inspiration for McElvenny is bountiful. Living in San Diego with his wife, Rachel, also a military veteran, and his two daughters, ages 9 and 2, he has a lot of support. His 9-year-old daughter, Lupe, is by far his biggest fan, and she often helps him carry his prosthetic legs.

“My daughter is one of my motivations that keeps me going. She has never looked at me losing a leg like a bad thing; it’s just how daddy is and she always expects me to be dad,” McElvenny said.

Happily juggling the demands of being a husband and a father, triathlon training, and life as an amputee, McElvenny also coaches and volunteers at Lupe’s school.

Since beginning as an endurance athlete, his race times have steadily improved, and McElvenny’s most recent goal is to break the amputee Ironman record, which is 9:57. It is a difficult goal but a reasonable one for an athlete of his caliber and impressive track record.

At the end of the day, McElvenny said, having a constructive attitude and improving our lives is up to each of us.

“Embrace your circumstances and situation. That can go for anyone. For me, that [situation] was missing my leg, and there were a lot of different things I could have done, but I decided to find something I was passionate about and just go for it anyways,” McElvenny said. “Everyone has that option; whatever is going on in your life, you can choose to let your circumstances defeat you, or you can own it. Own your circumstances and go do something great with it.”

That’s the kind of advice we can all take to heart.

Eric recently designed his own t-shirt  with the help of Athletes Brand. It says “inspire” with Eric’s name subtly spelled backwards in white. All proceeds from t-shirt sales will go toward Operation Rebound.

About the Author: Alison Ryan