A superhero is defined as a type of fictional character possessing extraordinary talents, supernatural phenomena, or superhuman powers. A superhero can typically be found on the big screen in bright and tight costumes, fighting evil and saving the world.

Rampone wears the No. 3 on her chest and can be seen providing lock down defense on any given soccer field. Oh, and the occasional goal, which I got to witness on April 19, when she scored her first club goal (5th career goal) in Sky Blue FC’s home opener against the Portland Thorns. She jokes that she “stops the goals, doesn’t score them.”

Rampone may not have a cape or the ability to fly through the skies like Superman or what fans like to call her, “Captain America,” but Rampone’s journey proves that she doesn’t need super powers to do it all.

After making her debut with the National Team in 1997, Rampone has been an unstoppable force on the back line, becoming one of the most consistent and versatile players in U.S. Soccer history. At the age of 38, the New Jersey native is currently the most capped active player in team history with 289 appearances. With that, she is a three-time gold medalist (2004, 2008, 2012), a silver medalist (2000), and she’s the lone remaining member of the epic 1999 World Cup victory against China PR.

Eventually all superheroes have face villains that try to dethrone them from their successes.

Rampone faced her first villain in 2001 when she tore her ACL. She took a year to recover, but made a stellar comeback, returning in 2003.

It didn’t stop there for the captain. She was diagnosed with Lyme disease in 2011. One of the most common detriments of the disease is fatigue, which didn’t bode well for the woman who has to play at the highest level and compete against some of the best-conditioned athletes in the world. Like the English proverb says, “A Smooth Sea Never Made A Skilled Sailor.”

Fast-forward to the present day and Rampone’s coaches and teammates will tell you that she continues to be the fittest and quickest player on the team; moreover, a leader, one that through all her hardships and experiences proves day in and day out just how tough she is. Perhaps the most powerful attribute to Rampone’s superhero resume is simply her love of the game.

“I love to compete,” Rampone said. “It gives me that adrenaline. I say competing is my medicine. There is nothing better than getting out into a great training session, getting better, making your teammates around you better and translating that to the game. I think that’s what puts it all together for me. I’m trying not to let anything slow me down. Obviously being a mom, having Lyme disease and injuries, it’s about mentally overcoming it and being stronger.”

Lucky for Rampone, she gets even more strength and support from her two daughters Rylie, 8, and Reece, 4.

After all, what’s any superhero without their sidekicks? Both Rylie and Reece travel all over the world with their mom. In fact, Rylie is already almost through two passports. Although the girls trek along with Rampone and her teammates, she never lets her two roles get in the way of one another.

“I think it’s just a matter of focusing on what I’m doing at that time,” Rampone said. “So if it’s my training with my girls on the team or being a good teammate, I’m focused 100% on that. As soon as I cross the line and the whistle blows, I’m a mom. It’s just making sure I don’t overdue one side. I think the girls on the team respect that I am a mom, that I am balancing and that I am tired at times, but I’m very lucky and fortunate to still be able to play at the age of 38 and have mommy time and enjoy the kids.”

Rampone credits the strong development of her daughters to all of the traveling and being surrounded by such positive female influences. 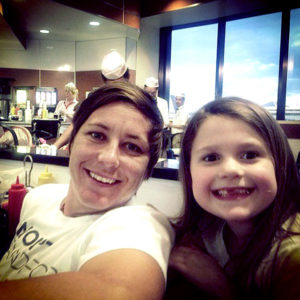 “I think as females, they are confident,” Rampone said. “They see so many great role models from the National Team to Sky Blue FC. Seeing how you take care of your body and how you have to train for big games. Rylie is really understanding all that. She relates it back to her game.”

“I think one of the moments when it all came through was when Rylie was playing against a taller opponent and she was like ‘Mom they’re so big,’ and I said, ‘Well, mom’s got to go up against Abby [Wambach] every day at practice’ and then it clicks. It’s just translating, which is nice to see and hopefully they will grow up strong and confident and go after what they want to do.”

In the midst of a non-stop crazy schedule, Rampone still manages to find a way to give back.

“It’s who I am,” Rampone said.” I always put people in front of myself, I always think about myself last. I have had such an amazing, great life and career and I want to just pay back and give back to the kids that need it and to the kids that can’t live the life I am living.”

She is the spokesperson for the K. Hovnanian Children’s Hospital at the Jersey Shore University Medical Center, where both her daughters were born. Rampone takes the time out to visit kids around the hospital, sign autographs and give them a reason to smile.

“It’s something that I can do away from the soccer field and feel like I’m giving a child another chance,” Rampone said. “I love to give back as much as I can and obviously my time is limited in that, so maybe when the career is over I’ll be able to do a little bit more.”

With the 2015 World Cup approaching, Rampone will once again make an appearance on the pitch with the National Team. By that time, she will be 40 and could potentially be the oldest U.S. WNT player to win that cap. It’s further proof of how much fight Rampone has had in her and still has left.

This World Cup, following the heartbreaking loss in PKs to Japan in 2011 is something Rampone and her teammates have been hungering for. This may also be the time when Rampone will hang up her boots and pass the torch to her teammates.

“I just take every day for what it is and if I can be on the field starting, it’s great,” Rampone said. “If I’m on the bench as a reserve and helping coach the younger players and give them the confidence they need, that’s where I’ll be. But, I would really love to part of that team.”

“It’s definitely coming, I know that as I’m getting older I try not to look at the age and how I’m performing on the field, but at the end of the day I’m feeling good.”

Indeed, it has been and continues to be a juggling act for Rampone, but the proof is in the pudding. She just keeps going. She is confident in her abilities, but with the utmost humbleness. Rampone is the superhero that never dies down, the superhero that cannot be defeated. A superhero to America, her teammates, but most importantly her family, especially Rylie and Reece.

Once all is said and done and Rampone does eventually hang up her boots, U.S. Soccer will be losing a legend. While her career and statistics will be going in the record books, the heroics of Rampone on and off the field has made an impact that no record book could ever show.

About the Author: Brittany Alvarado