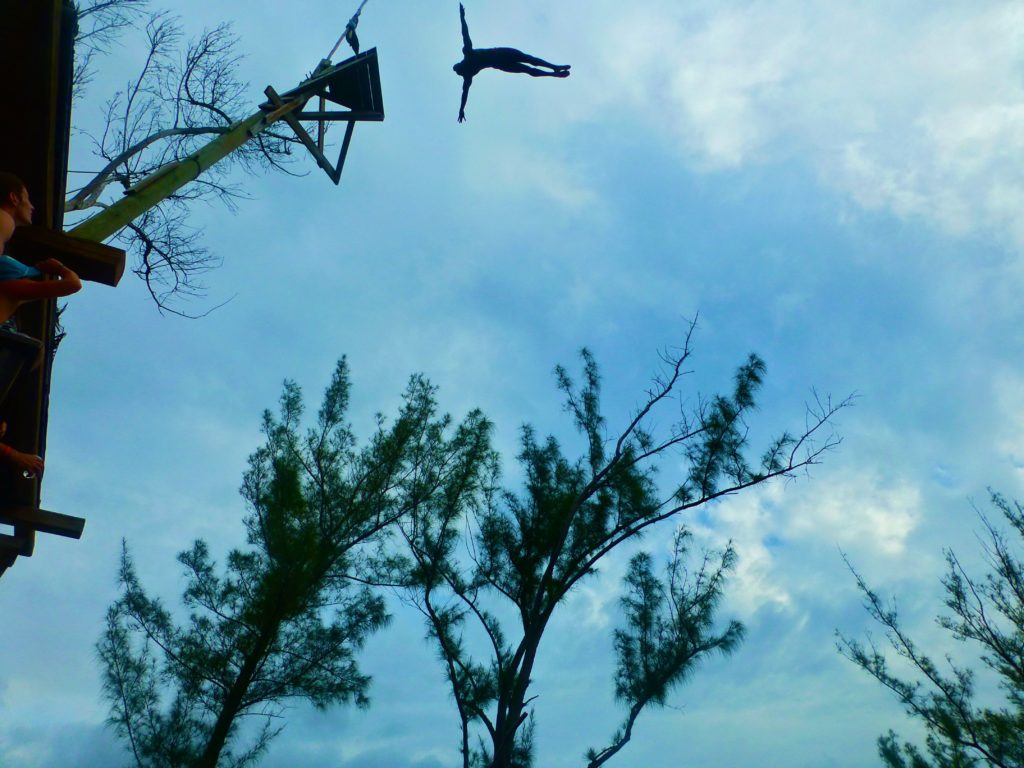 Korey Wilson dives off the 85-foot platform at Rick’s Cafe in Negril, Jamaica.

Sometimes the purpose for playing is safety and survival. It’s kind of ironic that the native cliff divers at world-famous Rick’s Cafe in Negril, Jamaica, at one time, decided that hurling themselves off of cliffs 85 feet above the ocean’s surface was the “safer option.”

It may look like the chiseled divers at one of the world’s top-10 rated bars are simply there to entertain the crowd. However, what many don’t realize is that they act as lifeguards, security guards, and voices of reason for the occasional inebriated partier who thinks that it’s a good idea to jump from the 45-foot cliff, or for the first-time jumper who wants to take the plunge, but freezes upon seeing the dizzying waters far below.

When it comes time to entertain, the divers dial up their personalities and their concentration. They roam Rick’s Cafe with tip buckets and plenty of handstand pushups to announce their high-wire dives. Upon seeing the half-filled bucket on a busy Friday afternoon, it became clear that the partying tourists were more likely to tip their bartenders than their divers.

Korey “Spider Man” Wilson, 36, was the featured diver for the afternoon. He’s worked at Rick’s for 21 years. His teammate, Darren Witter, 33, started cliff diving at 8-years old, and his job for the day was to collect tips and announce Wilson’s act.

Wilson climbed rather easily up the tree trunk that houses a simple 3-foot platform at the top, 85 feet above the crystal clear blue waters and jagged cliffs that make the area so famous. A green and yellow Jamaican flag blew furiously in the wind, coloring the attempt with even more drama. Wilson waited for Witter to finish collecting tips and for the tour boats to get out of the way. He sat there with his feet dangling off the platform, eyes straight ahead to the west and the white Negril lighthouse behind him. The birds-eye view must have been spectacular, so far removed from the Vegas pool-like atmosphere, and nearly eye-level with the curvature of the earth.

Wilson waited with quiet anticipation until he got his focus and proceeded with the show. He stood up and did a handstand at the end of the platform for extra flare. Did Wilson not notice the wind up there? Once he got back on two feet, he bent his knees, threw his hands up, and jumped forward all while slowly flipping backwards into the water. He landed feet first but did not immediately surface upon entering. The crowd was left wondering what happened until he swam over to the far ladder and showed his face. Applause, whistles, and exhales all around. Another dive in the books.

“It’s a way of life,” Wilson said while standing cliffside after his dive. “It takes ourselves out of certain situations. It takes us away from crime, and helps us move our way up to something great in life.” 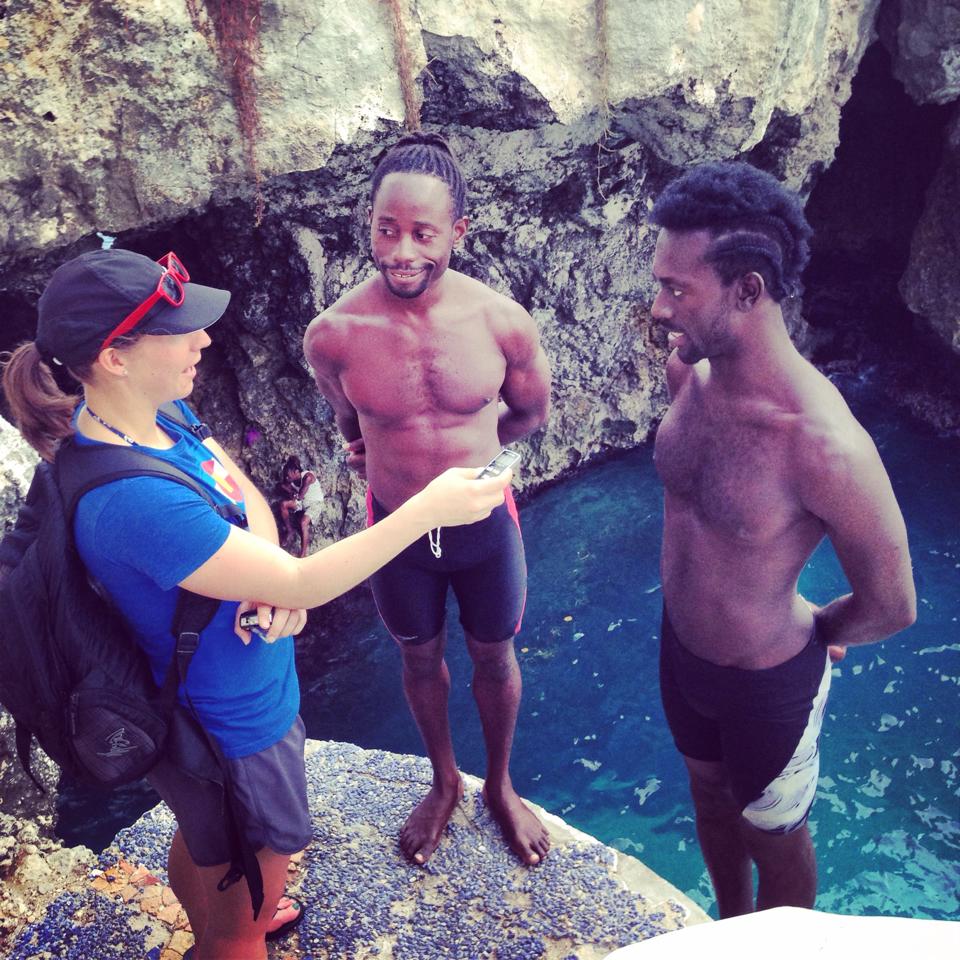 Jamaica is riddled with crime. Currently, it has the world’s sixth-highest murder rate (39.3 per 100,000). Much of that comes from gang activity, a very active drug culture, political feuds, and poverty.

Had Wilson and Witter not taken an interest in diving, it would have been easy for them to get involved in the negativity. Instead they gravitated toward diving, an individual sport that’s cheap and abundant in Negril. In the 80’s when Jamaican gangs were running rampant, Wilson and Witter began sailing through the air, letting gravity act as the only force on their bodies.

“It’s kept me away from a lot of negative people who want to do bad stuff,” Witter added. “It’s allowed me to achieve things that I never used to. I was born in the country. Diving for me is more than good. It’s great…This is how we make our living. It helps make us a better man in life.”

While Witter loves his diving career and often contemplates if he’s too old to compete at a higher level, his family isn’t so certain about his career choice. In fact, even though hundreds of thousands of people have witnessed Witter dive over the years, his parents, despite living in Negril, haven’t seen their son perform live.

“If my mom were to see, she would be freaked out,” Witter said. “My dad has only seen in on camera. They aren’t really into the diving.”

After all, the sport inherently has its dangers. The risk for human error is great even for the best in the business.

“I was doing a backflip from the high one and I landed on my back and I was knocked out. I hurt my sternum on that one,” Wilson said. “We don’t want any injuries. You don’t want to go to the hospital here.”

While Witter loves being a diver, Wilson has conflicting feelings. Wilson is raising a son and sees his job as just that — a way to earn a living and raise his family.

Wilson said that he will teach his son how to dive for fun, but as for his son doing it professionally?

“I wouldn’t feel good about that. Trust me,” Wilson said. “He says he wants to be a doctor, so I’m glad he’s going to be a doctor.”

Wilson doesn’t just want more for his son in life. He wants more for himself as well.

“I want to go back to school and study food and nutrition,” Wilson said. “My purpose in life is to be alive, be healthy, and take care of my kids. My purpose is to live a peaceful life even though there is temptation all around.”

Witter has a similar “live simply” approach to life.

“Wherever life takes us, that’s where we want to be,” Witter said.

If a peaceful go-with-the-flow life means jumping FROM great heights, then who’s to say they’re wrong? In the United States, we’re constantly urged to jump TO great heights.

Living freely, loving greatly, and slowing down enough to enjoy life is the Jamaican way of life in a nutshell.

So if you find yourself on the island, live freely, love greatly, slow your pace, tip your driver, and also be sure to tip your divers. They’re helping you paint your vacation and your life with strokes of awe, beauty, and excitement. They’re also showing you that occasionally, it’s okay to climb high and dive deep in life.