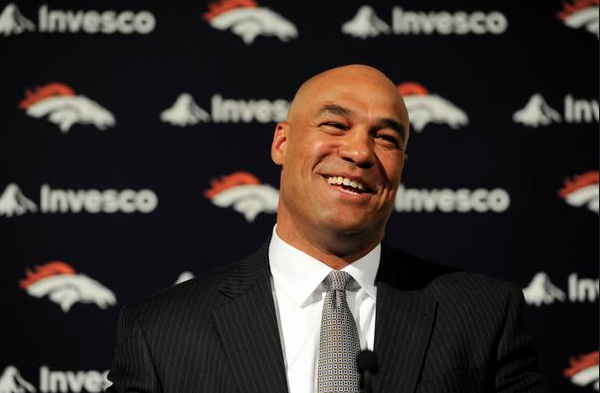 If you see Denver Broncos running backs coach Eric Studesville, 46, in New York or New Jersey this week, he’s likely to have an ear-to-ear grin on his face. In fact, when we ran into him during the Super Bowl’s Media Day, it was the kind of smile that sweetened the air around him.

Don’t mistake that smile for pure bliss, however. Studesville’s first Super Bowl appearance is rather bittersweet.

“They would definitely be here,” Studesville said of his parents, who were killed in a motorcycle accident last June. “There’s no chance they would miss something like this. They are here, just in a different way. They’re with me all the time and they’re with me in spirit.”

His parents, Al and Jane Studesville, were killed on a hot Texas highway. They were taking a road trip from their Wisconsin home to the Grand Canyon when a truck swerved into them, killing them instantly.

Studesville was at home with his wife and two children, Sydni, 9, and Eric Jr., 15 months, when he heard the news. The Broncos quickly gathered the “troops” and assembled the resources to help Studesville with funeral arrangements, travel, and overwhelming support.

“They are my family,” Studesville said of the team. “The players, the coaches. That’s the beautiful part about being on a team. It really is. When you go through something like this that you never expect, you need so much that you can rely on. You don’t realize how much you need that support at the time.”

Studesville came to the Broncos rescue in 2010 after the team fired head coach Josh McDaniels more than halfway through the season. He took over as the interim head coach four four games, and carried the burden of a 4-12 record on his shoulders. It was simply time for the Broncos to return the favor, and try to carry some of his grief.

Growing up, Studesville’s parents had very high expectations for him. 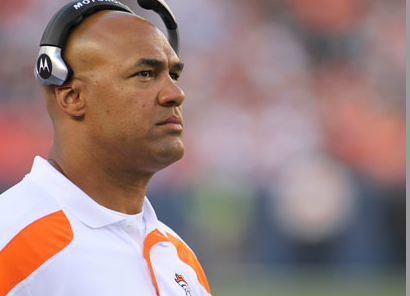 “They wanted me to be the best that I could be no matter what that was,” Studesville said. “They pushed me and demanded that of me. It got to a point that you then expect that of yourself. That was the ultimate goal. I didn’t see that as a kid, but I see that now.”

Now with 17 years of coaching experience in the NFL, he’s done is parents proud.

Studesville admitted that while he’s trying to pass along what his parents taught him to his own kids, a coaching career in the NFL can make that difficult.

“When you’re in this profession, your wife does a lot more of the parenting than you do,” Studesville said. “I just try not to be the favorite “uncle” that comes in and disrupts the household. My wife, Stacy, is unbelievable and does a great job at home.”

When Studesville is home, he supports and encourages his kids the same way that his parents did for him. His favorite memory of his parents is simply just sitting in the same room and laughing together. Those are the same memories he’s making with his own children.

While Studesville’s parents will not be in the MetLife stands, his wife and his children will be.

“My daughter, I don’t know if she’s touched the ground in the last four days,” Studesville said of Sydni’s excitement about the Super Bowl. “She’s just kind of floating everywhere.”

Families come in all shapes and sizes. If you’re in the NFL, they come with helmets, shoulder pads, and clipboards.

Studesville can attest to that. In fact, it can be seen in his smile.