When the focus is on internal progression, amazing external surprises are sure to follow.

Professional snowboarder Kimmy Fasani is no stranger to looking inward for strength in order to make the external possible. In 2011, she became the first female to land a double backflip both in the terrain park and on powder.

Despite the amazing acrobats between the temporary space of the whitest of snows and the bluest of skies, twisting and turning took on a whole new meaning for Fasani in the form of her own story.

On December 11, 2012, not quite a full year after her double backflip feat, Fasani drifted off a park jump at Mammoth and bounced into a congregation of trees. She fractured her pelvis and blew out the ACL, MCL, and PCL in her left knee. It was the first major injury of her career and it abruptly ended her season.

“I think for most people it could have been a career ender, but I knew I wasn’t done yet,” Fasani said.

For somebody so active, the first two months of her post surgical recovery were dark. For the most part she was bedridden because of her pelvis.

“You just don’t know how much you love something until you lose it,” Fasani said. “The injury was really an eye opening experience because I didn’t expect that to happen.”

Instead of ripping down mountains and snorkeling through the deepest of snows, Fasani got to work indoors. Once her pelvis was a little more healed, Fasani’s rehab three months after the accident included 10-25 minutes on the stationary bike and pool time along with physical therapy 2-3 days per week.

Eventually she left her Mammoth Lakes home for southern California to work with renowned trainer Brad Jones, who has worked with a lot U.S. team snowboarders. For six months, Fasani worked on improving mobility, non-compensation techniques, and building up her strength.

During that time, most of Fasani’s thoughts were dedicated to her comeback, whether she was in the gym or in the kitchen.

“I love eating healthy and I’m grateful I live in a place where I can,” Fasani said. “For my recovery, that was a huge focus. I wanted to put things in my body to help it heal. Everything was high nutritional value because I wanted to give my body every chance I could to really make a full recovery.” 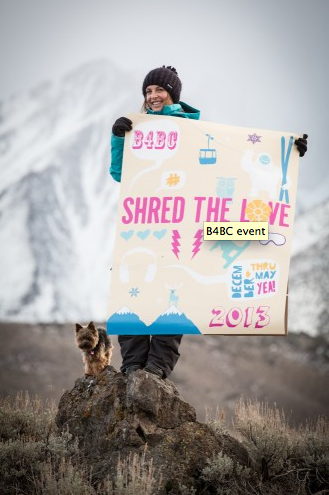 While her primary goal was to be strong on the snow again, Fasani decided that with all the work she was putting in, she wanted more.

“At the time, I decided one of the biggest goals of my recovery was to to do a triathlon,” Fasani said. “It was another thing to focus on rather than just having snowboarding.”

On October 21, 2013, Fasani completed the Lifetime Tri Oceanside where she took first in her age group, and placed fourth overall among women. The finish line was more like a starting line for Fasani and her new knee.

Fasani grew up in Truckee, CA and after her father passed away from lung cancer when she was just a teenager, she was raised by her mother.

“She gave me all the power in the world to do what I wanted to do and follow my dreams,” Fasani said of her mother, who two years ago was also diagnosed with cancer herself.

With cancer being a recurring disease in Fasani’s family life, she decided to become an ambassador for Boarding for Breast Cancer. B4BC provides education, prevention, and support for young people and the action sports community. It also promotes early detection and healthy active lifestyle choices.

It was a natural fit for Fasani, who wanted to show through her recovery that inspiration can take place on and off the snow.

Fasani was cleared at the beginning of October to get back on snow again.

“The second I got back on snow, even just riding up the chairlift, it made me feel like I was whole again,” Fasani said. “The first turns I made, my knee felt good.”

She wears a knee brace when she rides now, and plans on taking it slow, especially because she has a full season ahead of her. She’s spending January in Japan, then going to Whistler, B.C., and rounding out the season with a trip to Alaska in April. While she still has huge passion for hitting big jumps, her focus this year will be on riding big mountain.

“I’m going to focus on just doing lines and putting lines together with natural tricks out on natural terrain,” Fasani said.

In a way it’s fitting for Fasani, who made a remarkable natural and organic recovery both inside and out.

“Fear definitely came into my life a lot more than it had before,” she said of how she felt after the accident. “I felt like I was really strong and put in all the time I needed to in order to be injury free at the time of the crash. Fear was a huge part of my recovery.”

Her husband, Chris, helped expose her to certain elements of fear prior to getting back on the snow. Once she was well enough, they started doing activities together such as rock climbing, mountain biking, and yoga to test out her knee.

“If I was afraid doing that stuff, it was the perfect place to start detaching from it and learning that I was okay,” Fasani said. “Throughout this year, I spent probably the last seven months working on letting go of that fear so that when I got back on snow I wouldn’t be afraid.”

Fasani has progressed women’s snowboarding in outstanding fashion thanks in large part to being able to manage her fear and expectations.

“I’ve always loved pushing my limits,” Fasani said. “Now more than ever, I’ve just gained a different confidence because I know my mind is a really powerful tool.

If the accident opened up a new layer in Fasani’s “toolbox” then maybe this injury was just a blessing in suspicious packaging for further progression.