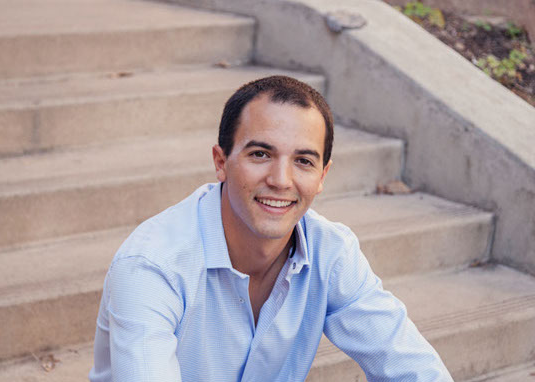 It’s routinely said that golf is the hardest sport to master. Anyone who has picked up a club would be hard pressed to find a more challenging way to strike a small ball and hope it soars hundreds of yards toward a hole the size of an orange.

Now imagine playing the game as a person who cannot see. That’s what makes Jeremy Poincenot so incredible.

The 26-year-old San Diego native and avid golfer went from 20/20 vision to legally blind in a span of two months. Yet, he didn’t give up on his sport. In fact, he went blind at 19 years old, and by 20, he was the World Blind Golf Champion thanks to a thrilling and aptly-timed chip-in on a playoff hole.

Poincenot, who currently has an 11-handicap, plays by feel and relies on his feet to read putts. For other shots, he looks for guidance from his father and caddie, Lionel.

“I’ve always loved golf, but now that I’ve lost my sight, it’s a bigger part of my life,” Poincenot said.

Poincenot grew up playing baseball, basketball, and soccer, but he found his true passion on the fairways and greens. With parents who met and worked in the golf industry, Poincenot had a club in his hand as far back as he can remember. He went on to play in high school, and from 12-17 years old, he kept his etched-in-stone Sunday tee time with his father.

“It’s how my dad and I became so close,” Poincenot said.

Once he went off to San Diego State, he maintained a 4-handicap by playing regularly with friends.

Then in 2008, during his sophomore year, he noticed that he had to squint to read signs while walking around campus. A visit to the optometrist revealed that Poincenot didn’t have a vision problem that corrective lenses could fix. In fact, his doctor initially believed that he had either a pituitary tumor or a brain tumor. 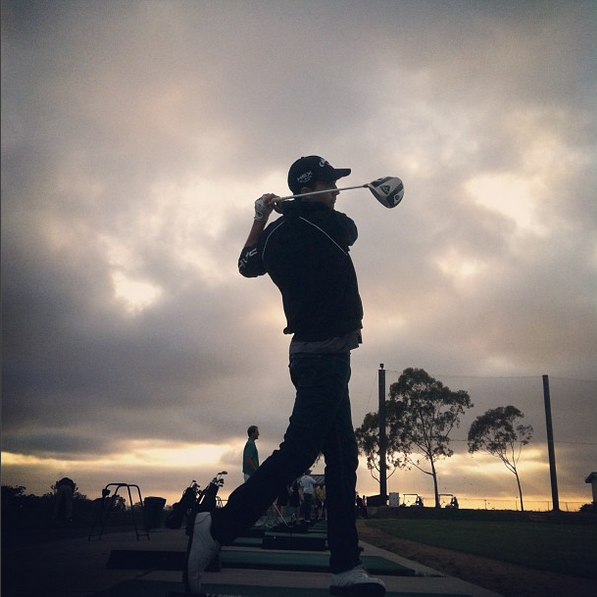 However, tests confirmed there were no tumors. Yet, his vision continued to worsen. That’s when he received a diagnosis of Leber Hereditary Optic Neuropathy (LHON), a rare genetic condition that affects central vision, and has no cure.

“I have vision similar to a donut. I have the whole donut part, but I’m missing what the donut’s missing,” Poincenot explained. “If you put both hands directly in front of your face, and then you look at your hands, that’s what my vision is like.”

So, Poincenot could no longer read without assisted technology and he had to turn his car keys back over to his parents three years after he got them. At the time, he was an international business major, which required a semester abroad, so he switched to business management with an emphasis in entrepreneurship.

“After I lost my sight, I had enough trouble just being in America,” Poincenot said. “Thinking about traveling to another country and doing schooling there was too much.”

Thinking he would have to give up on golf, Poincenot was understandably down.

“I thought it was too visual of a sport,” Poincenot said. “Golfers in general don’t like slow play. I didn’t like it when I could see, so I thought there’s no way I’m going out on the course if I’m slowing people down.”

What he didn’t know was that before he went blind, his dad bought him new clubs with the intention of giving them to him on Christmas. Lionel pulled the gift out early early to uplift his son’s spirits. From there, the two went to the driving range.

“I went out and said, ‘If I miss the ball entirely, I’m not going to do it anymore. I’ll just be done.’ I didn’t miss any, and I actually hit a couple well.”

His first round out after losing his sight? He shot a 99.

That’s when his mom, Lissa, did some research, and found the United States Blind Golf Association (USBGA). When she told him about the organization, which offers golf tournaments to those with vision impairments, he thought she was joking.

“My mom is the brains behind the operation. She set me up for success,” Poincenot said.

Poincenot falls into the B2 category.

In his first big tournament since losing his sight, Poincenot was paired with a B1 golfer. Poincenot shot a 97, and was livid with his play. The B1 golfer shot a 324, and said, “I had the time of my life.” 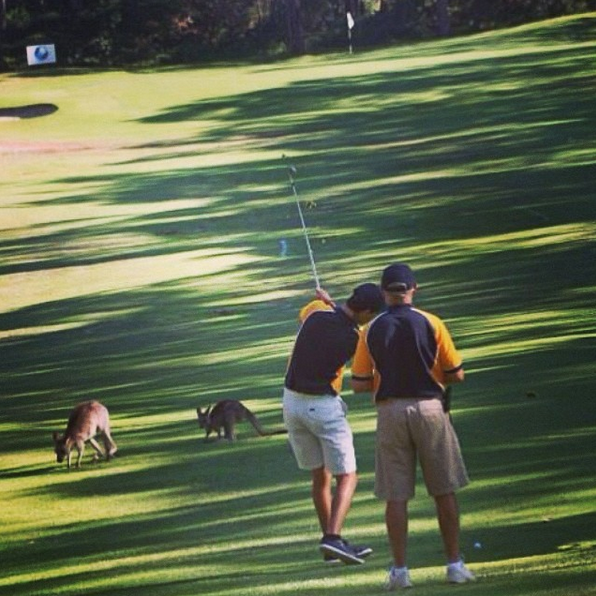 Jeremy and his dad at the World Bling Golf Championship in Australia. Photo: Jeremy Poincenot/Instagram

“That’s when I knew I had to change my expectations about my play,” Poincenot said.

On the course, Poincenot’s dad functions as both his caddie and his eyes. He tells his son the length of the hole and then they discuss which club to use.

“He’ll point in the direction where he wants me to hit the shot. He points down a line and I’m not able to see exactly where he’s pointing, but I get a sense of which direction to hit it,” Poincenot said.

After a few practice swings, his dad stands directly behind him, which is something caddies are prohibited from doing in fully-sighted golf. Then, he tells his son to angle a little more right or left depending on the hole.

“For putts, I’ll walk the amount of paces or yards it is from the ball to the hole, and feel with my feet if it’s uphill and breaking left to right,” Poincenot said. “I go back to my dad and confirm ‘uphill, breaking left to right’ and he’ll either agree or disagree.’ I take practice strokes with that in mind.”

Poincenot’s strategy has worked from the start. Just a year after going blind, he won the 2010 World Blind Golf Championship in England, which pits 60 competitors from 14 different countries against one another. Not only did he win, but he did it by sinking a chip shot on a playoff hole.

Poincenot has played in tournaments all over the world and he has intentions of putting on a good show in Japan this November at the 2016 World Championships. He also competes in regional amateur tournaments against fully-sighted golfers.

When not on the course, he’s a professional inspirational speaker.

“My purpose is to inspire others to take control of their life and turn trauma into triumph,” Poincenot said.

Poincenot hasn’t mastered golf, but he’s proven that he can recover from anything, be it a bad hole or losing his sight.

If you’d like to learn more about Jeremy Poincenot or book him for a speaking engagement, visit JeremyPoincenot.com.