NBA Star Channing Frye, and Amputee Danielle Orner Turned To Yoga To Get To Know Their Bodies

Home/The Big Play/NBA Star Channing Frye, and Amputee Danielle Orner Turned To Yoga To Get To Know Their Bodies
Previous Next

NBA Star Channing Frye, and Amputee Danielle Orner Turned To Yoga To Get To Know Their Bodies

Some people simply call yoga a form of exercise. Others call it their practice or a science of well-being.

What yoga truly comes down to is the synthesis of the mind, body, and soul.

“Yoga helped me come back into my body,” Danielle Orner said. “When you’ve been sick for so long, you kind of distance yourself from your body because it’s been a place of pain.”

Orner, 29, was diagnosed with bone cancer when she was 15 years old. At 16 years old, she had her lower leg amputated and spent the next decade in and out of the hospital battling cancer.

“To get yourself to treatment, you kind of fool your body,” Orner said. “Cancer is one of those things where the illness didn’t make me feel as sick as the treatments did. So when a tumor was growing, I didn’t know. I was completely reliant on scans and doctors to tell me what was going on with my body, so I just learned to trust those things. Yoga really helped me tap in and come back, and begin to trust my body again. I learned how to listen to the cues of my body rather than relying on other people.”

Orner has become somewhat of a fixture in the world of yoga because of some eye-opening and unforgettable images of her doing poses with an artificial leg. What else would you expect from a woman who has four younger brothers and a father in the Marines? Toughness, grit, and fight are basically in her blood.

“I’ve been an amputee for so long that I think in terms of ‘How can I do that?’ Orner said. “Especially in yoga because there are a lot of poses that I’ll never really be able to do the same way that someone who’s able-bodied would be able to do…I don’t try to look like everybody else or perform like everybody else. It’s more like how do I get the best out of my life? Our culture is very much about appearances, success, and normalness. Yoga taught me that you do the poses because they serve you. You don’t serve the poses. It’s the same thing in life. You do what works best for you.”

Orner isn’t the only athlete to tap into yoga for healing purposes.

Channing Frye, 30, of the Phoenix Suns relied on yoga to nurse his heart back to health, both literally and figuratively.

About to enter his eighth year in the NBA in 2012, Frye had just finished rehabilitating his torn labrum in the off season. He felt ready to go, but needed to pass a physical administered by the team. That’s where the hook up came. The team saw an abnormal echocardiogram and sent Frye to the Mayo Clinic, where doctors diagnosed him with dilated cardiomyopathy, or an enlarged heart. It was the same condition that killed Eric “Hank” Gathers on the basketball court in 1990, when he was just 23 years old.

Frye was forced to sit out the entire season to allow his heart the time to heal. 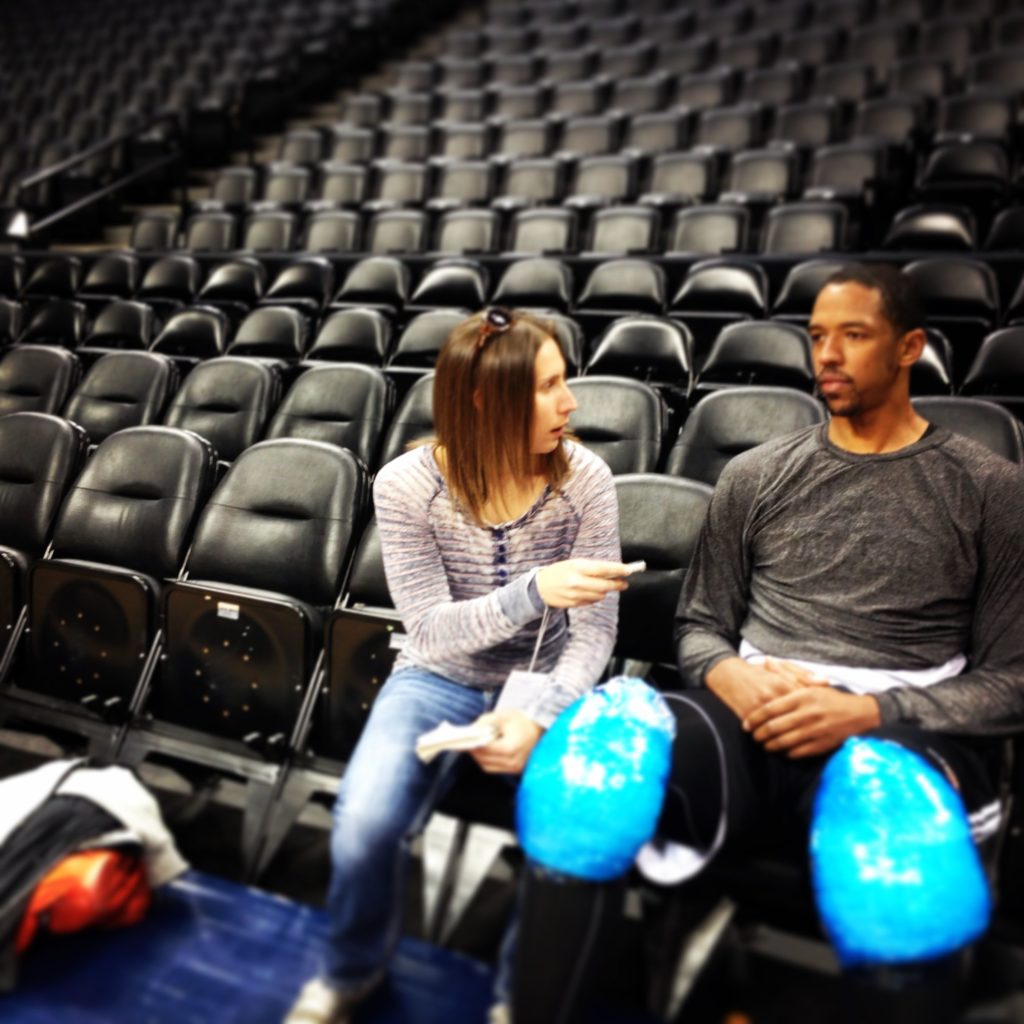 “I really do love the game of basketball,” Frye said. “I think everyone says it, but when it’s taken away and you’re given adversity, it’s like you have to start from the bottom. It was the first time I had ever had to take that many months off from playing.”

Doctors conservatively and progressively allowed Frye to be physically active as his heart returned to normal. However, one of the only things that Frye did for a long time was yoga. Imagine how big the yoga mat is for a 6’11” basketball player!

“It helped save my life,” Frye said. “It helped me calm down. It helped me to understand that nothing is more important than the present. If you’re in the present, you’re going to be focused. I pay more attention to how my body feels now.”

Frye was able to resume his basketball career just in time for the 2013 season.

“He got the clearance to play and we thought it was going to be a slow build him up,” Suns head coach Jeff Hornacek said. “We went up to Flagstaff, AZ, which is at 7,000 feet elevation, and he kept pushing himself even when he got tired. He’s been huge for us. I think when you’re out of basketball for a year and a half, maybe you appreciate coming back and being able to play more and he’s done great for us.”

Although Frye is happy to be back on the court, he took some positives away from the experience, particularly as it relates to his family. Because yoga taught him how to live in the present, Frye was able to re-connect with his wife and two young children.

“I never really had an opportunity to hang out with my kids that much,” Frye said of his  “When you’re playing in the league, everything is really about you. Everything is about what you need, and your schedule.”

“I was trying to make up for lost time with my family,” Frye said.

Both Orner and Frye are often called inspirational, but before you determine just how regenerative their stories are, consider this:

“A lot of people think they’re complimenting me when they say ‘Oh my gosh, you’re an amputee? I didn’t realize it. You seem so normal,'” Orner said. “I don’t consider that a compliment because it’s not what I’m going for. I’m going for trying to live my best life, not necessarily trying to fool people into thinking I’m normal.”

This wasn’t always the case for Orner. She hid her leg and her illness in college.

“I kind of stopped talking about it,” Orner said. “I would tell people only what they needed to know and I didn’t really write about it. A lot of my college friends didn’t know when I needed to go in to get surgeries. I would schedule them over vacation.”

That gave Orner the time she needed to process the physical and emotional aspects of her disease as she went through the healing process.

Orner has been cancer-free for five years, and she credits that to yoga and a strong vegan, plant-based diet.

“I think once I started to heal myself with food and with the way my daily life is set up with yoga and with meditation, you really start to realize, ‘Woah, my body can feel this good,'” Orner said.

“I think a lot of my purpose is to change the idea what it means to be healthy in our culture because we have a very narrow definition,” Orner said. “It’s kind of like, if you’re not sick, then you’re healthy. That’s not necessarily true when it comes to cancer. We don’t emphasize prevention enough. We don’t talk about the mind-body connection. We don’t talk about thriving. We also don’t consider people who are differently-abled to be healthy. A lot of people who do live with different conditions are actually more healthy than the ‘normal’ population.”

Yoga has clearly put Orner and Frye in touch with their bodies in a way that they had never experienced before. Perhaps that’s just what society needs more of.

“I think we’re very isolated from our bodies in this culture,” Orner said. “We have so much media that tells us this is the airbrush perfection we’re supposed to be, and when we don’t reach that, we feel guilty or shame, and so we try to disassociate from our bodies for that reason. We also have the obesity epidemic, and we literally have to train people how to feel when they’re hungry. We’re that disconnected from our bodies.”

The mind, body, and soul are designed to feel great. It’s up to us to put in the work to actually feel alive.

If you want to learn more about Danielle Orner, check out her blog.